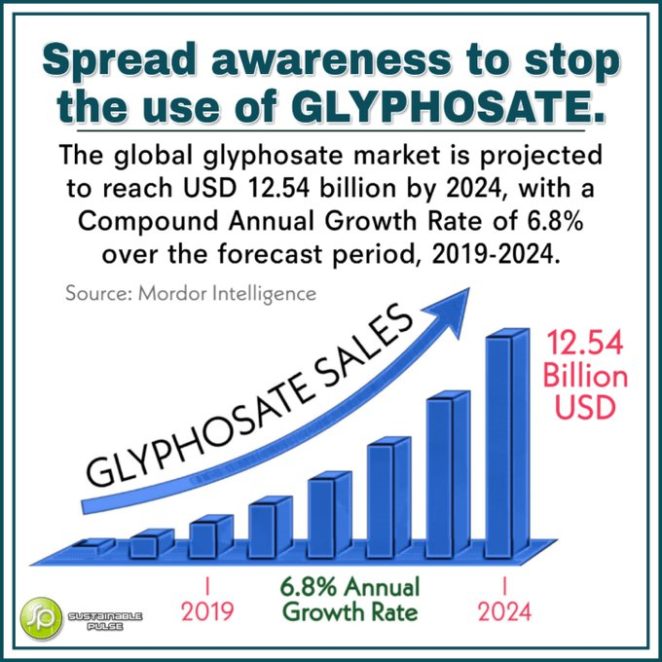 This is terrifying – we must all take action to stop this growth in sales of glyphosate! https://t.co/2nF7eaubye#glyphosate #sales #Bayer #Monsanto pic.twitter.com/wrdQZekfPa

With over 18,000 lawsuits against Bayer and Monsanto being litigated in judicial systems throughout the world due to the weed killer Roundup, the narrative has been that the glyphosate in Roundup is a carcinogen.  However, the impact of glyphosate appears to be small in comparison with the rest of the world because about 18,000 people out of 8 billion people in the world have contracted cancer from the consistent use of Roundup.  That is .000225 percent.

The problem is that glyphosate is sprayed upon genetically modified crops made by Monsanto.  The crops are modified so that the crops are not destroyed by the herbicide.  However, the glyphosate remains on the crops which results in glyphosate being in most of the food products that contain corn, rice, barley, wheat, or soybeans.

From the above tweet, Bayer and Monsanto expect to make $12.54 billion in 2024 on glyphosate alone.  That means that glyphosate has more of an impact than you think.  Let’s check out a few statistics on glyphosate in regards to the food that we eat.

Back in 2012, 45.2 percent of the crops were genetically modified to resist glyphosate.  Now, that percentage has grown to 80%.  That means that four out of the five times that you eat a meal, you are possibly consuming glyphosate.  The miniscule percentage of the impact of glyphosate has now increased exponentially when you look at the total picture.