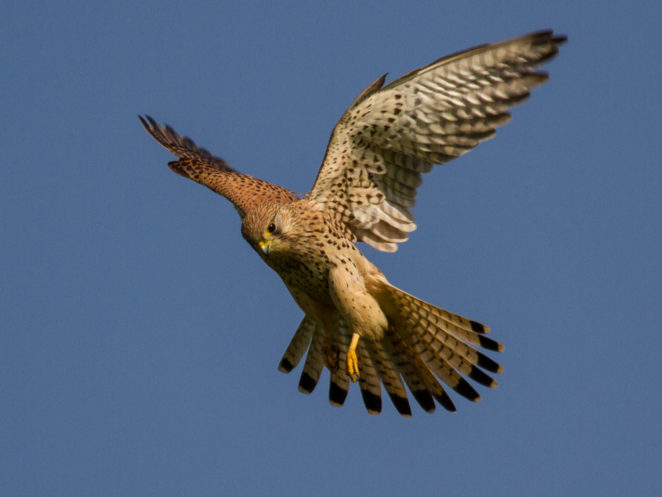 The kestrel (Falco tinnunculus) is Europe’s most common bird of prey, being found across the continent and in many localities from city centres to wild moorland. It is often seen alongside major transport arteries such as railways and motorways.

Male kestrels have spotted chestnut upperparts with the underparts being buff-brown with black streaks. The tail is blue-grey, as is the head and rump, with a broad black band near the white tip. Females have rufous-brown upper parts with darker barring, and a brownish tail with several darker bars.

The legs of the kestrel are yellow, as are the rings around the eyes and the cere (at the top of the bill). The bill is hooked.

Kestrels only call during the breeding season, usually with a loud “kee, kee, kee”.

Kestrels are noted for hovering, although they will also stoop from a perch to catch prey. Food consists mainly of mice, voles and insects, although urban kestrels often take house sparrows.

Breeding begins in February with aerial displays to attract mates.

Kestrels do not build nests but make use of suitable locations such as holes in trees or ledges on cliffs or buildings. They will also use old nests that have been abandoned by other bird species.