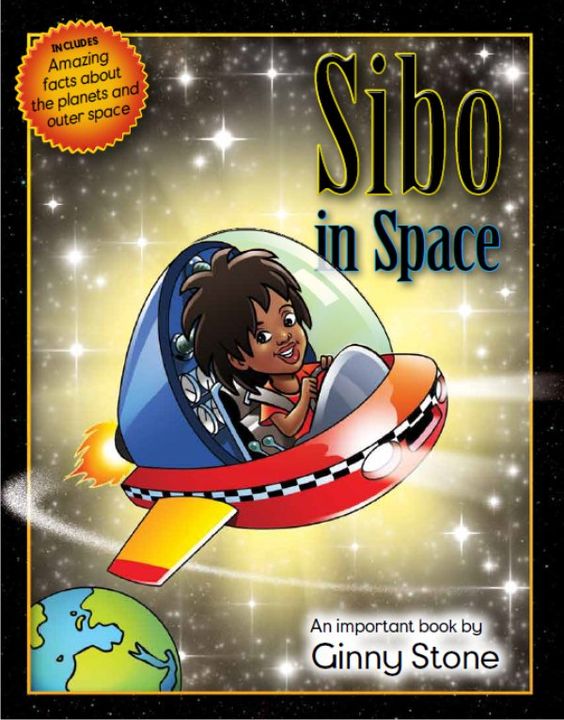 Instructive for both adult and child alike, Ginny Stone’s Sibo in Space (Lets Look; ISBN 978-1-920116-75-0) is an exciting and highly accessible introduction to the field of astronomy. Written in verse as a reader that is directed mainly at tweens, but suitable for children of any age, I bet that, even if you’re an adult reading the book together with your kids or other learners, you’ll find out some facts that even you didn’t know. No matter what subject Stone covers in her various books in the Sibo series, which is devoted to encouraging children to help green the planet, she always obtains the insights of leading experts in the field, so that all the books evince the vitality of professionals with a keen knowledge of the subject at stake.

In Sibo in Space, Stone introduces the unique character of each planet in such a lively way that they all come to life, both in word and in brightly coloured illustration. Throughout the text, Stone also conveys the message of environmental wellness, backgrounded by the ubiquitous character of Earthman, an ecological expert who, from the beginning of the series, serves as a constant reminder of the need to focus on saving the Earth from the many challenges that it faces, due largely to mankind’s impact on the planet.

But don’t think that Sibo in Space is full of dire gloom and threatening warnings of disaster, for Stone always tempers the seriousness of her message with her joyful sense of humour and lust for life. Her humour is effectively conveyed in such lines as:

A learner could simply rocket his way through school.”

(Also, in this instance, I like the way that Stone indicates her gender neutrality – as the main character in the Sibo series is a girl, Stone actively shows her lack of gender bias by acknowledging the importance of boys as well. The strong role played by the empathetic and supportive father, who often takes Sibo’s side when her mother is more dubious about some of her ventures, confirms Stone’s unprejudiced and accepting stance towards both sexes.)

A key aspect of the Sibo books is the interrelationship between the text and the full-page colour illustrations, each of which is specifically geared towards effectively conveying the changing stance of the characters, as the story carries them forward. Not only do the pictures serve to highlight the most salient parts of the narrative, but they also expand on it in various ways, making the environmental message conveyed far more accessible than it might otherwise have been.

I also love the way in which Stone breaks the more difficult words up into syllables, to ease the pronunciation, which is especially important in verse, and in text such as this, which can easily be read aloud, either by a mother to a child, or in class, with some of the learners taking on the different roles. In fact, it would be very easy indeed to act out parts of the Sibo books at appropriate school gatherings and assemblies – the text really lends itself to this!

If you enjoy this book, why not try some of the others that are freely available on the https://sibo.co.za site, but don’t blame me if your entire family or school becomes hooked!

An Interview with Ginny Stone, Author of Sibo in Space

Lois Henderson welcomes as our guest Ginny Stone, author of fourteen books in the Sibo series, who combines a hectic home life with being secretary/treasurer of the Southern African Association of Science and Technology Centres (SAASTEC).

Lois: Good day Ginny, and thanks so much for participating in our interview. Please explain the background to your writing of Sibo in Space.

Ginny: I wrote Sibo in Space to celebrate the fact that 2009 was the International Year of Astronomy (IYA). Also in line with the green theme that runs through all the titles, I wanted kids to know a bit about space and what’s out there, but also that we only have one earth, and they have to look after it.

Lois: Please provide a synopsis of the plot of Sibo in Space.

Ginny: Sibo looks up at the stars with her dad one night, and becomes fascinated with the planets and outer space. She goes on a quest to find out more. She discovers all sorts of exciting facts about the planets and things like our bodies are made up of stardust, and how to safely watch an eclipse. Sibo in Space also includes facts about constellations that are very cool, and why the sky is blue.

Lois: What were your major challenges with writing Sibo in Space?

Ginny: Firstly, finding out all the info, then incorporating it all into the rhymes, so that it still made sense and was easy for kids to read and understand.

Lois: What were your highlights with your writing of Sibo in Space?

Ginny: This book was selected by SAASTA (the South African Agency for Science and Technology Awareness, part of the National Research Foundation) to be given out to children visiting science centres to celebrate IYA 2009.  4500 copies of the book were bought and handed out.

Oh yes – and this was the first title in which I introduced Sibo’s teacher – Miss Ball (named after my own daughter, who is a wonderful teacher) – into the storyline.

Lois: What has your feedback about Sibo in Space shown in terms of the impact that it has had on your target audience? Please give concrete examples of such, if possible.

Ginny: I have read this book many times to kids, and they always love it. They are fascinated that we are made up of stardust. I have read it countless times to groups of kids, and always get a positive response. It gets used a lot in schools. I made sure that the planetarium that Sibo and her family visited looked like the Wits Planetarium in the picture, and they used to sell the book in their bookshop. I guess this would not have happened if the book had been crappy!

Ginny: This was the first Sibo title (fifth  in the series) that the SAASTA/DST supported, but it was not the last…  (I also designed a game around the book – thousands of copies were used for National Science Week 2010.)

Lois: Thank you so much, Ginny, for granting me this opportunity to interview you. Sibo in Space should certainly inspire all kids to become excited about the planets! We wish you all the very best with your future Sibo books.