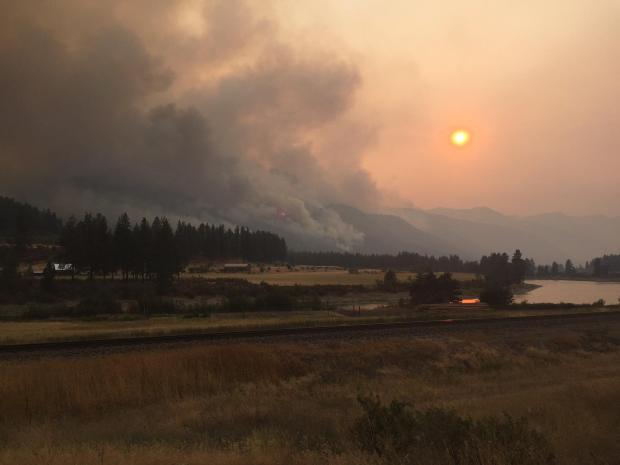 Most people have never been close to a forest fire and may not have a good idea about how they grow. This is a good time to explain about the expansion and devastation that occurs in a forest fire during a hot, dry year. The Sheep Gap Fire is representative of a typical fire.

The term, “forest fire” is primarily used here, though it might also be called a wildfire. The reason that this is specifically a forest fire is that it is mostly trees of the forest that are burning. There is another kind of wildfire, too; grass fire. Grass fires burn faster and hotter, but they don’t last nearly as long as a forest fire.

This is an important distinction. It normally doesn’t take very long for all the fuel to be spent in a grass fire. That is, it burns to ash rapidly and once there is no fuel, the fire dies.

The trees in Sheep Gap, named for the geological area the fire is burning in, are mostly ponderosa pine, lodgepole pine, and white fir. Many of these trees are 70 feet or more in height and in excess of five feet in diameter at the base. That is a great deal of wood, so it takes much longer for the trees to be completely consumed.

This picture is several miles away from the Sheep Gap Fire, but it shows the terrain of the area, as well as the helicopter and bucket being used to fight the fire.

The actual sheep gap is a gap between hills and mountains and the fire contains much more than the gap. Because of this, in addition to the rugged terrain, the lowest elevations of the fire are at around 3,400 ft and the upper elevations are at around 6,600 feet. This is mentioned because this can give a better idea of how rugged this country is. The difference in altitude occurs in only a few miles and it isn’t a steady slope. There are a lot of hills and ridges, with almost no level ground.

By mid-August, nearly all of Montana was dry and hot. These are normal conditions for August in Montana. However, the winter of 2016-2017 was colder than average, a trend that has been going on for a half decade. That wasn’t the problem, though. Record snowfalls occurred throughout the state, so the snowpack was far above average, going into the year.

An ample snowpack means that there is a lot of moisture in the spring for grasses and bushes to grow profusely. That is exactly what happened. Once the summer turned hot and dry, there was a great deal of plant material on the forest floor. This also dried out.

Several large lightning-caused fires burned in a number of locations in the state. In response to the fire threat and the fact that available manpower was being used to combat those blazes, Lolo National Forest instituted level II fire restrictions. These are designed to keep people from inadvertently causing a fire by restricting activity.

The problem is that nature has a tendency of ignoring fire restrictions. On August 28, 2017, at about 12 am, a relatively small thunderstorm moved through the area. Several dozen lightning strikes were recorded. A lightning strike can generate temperatures of thousands of degrees, and the strikes started over a dozen fires. One of these was the Sheep Gap Fire.

The strike most likely started a single large tree on fire. The fire grew quickly. By the time it was light enough to see, the Sheep Gap Fire was about 250 acres in size. The only available fire-fighting team, a group of 21, rushed to the fire.

Without additional manpower and equipment, the fire crew did what they could, but by evening, the fire had grown to 770 acres.

This started a trend of fast expansion. By the following day, the fire was burning 1,500 acres. Winds caused more expansion and daytime highs of 90-100 F / 32-38 C made matters worse.

At this point, 100 homes were evacuated and many more were put on pre-evacuation notice.

In early September, additional firefighters and equipment began to arrive. This was excellent news. Almost as good, a ridge of high pressure built over the area, creating a thermal inversion. In a thermal inversion, air is trapped near the ground, rather like a blanket.

This produced exceptionally smoky conditions for the firefighters (and for the towns near the fires), however, it also prevented temperatures from soaring in the daytime and helped moderate the winds. From September 4 through September 8, with the help of the inversion, the fire only grew from about 7,000 acres to around 9,000 acres. That is a lot of growth, but almost certainly far less than would have occurred without the inversion.

Today, September 12, 2017, the fire covers about 13,500 acres, with the fire 40% contained. That is all in just over 2 weeks. There is little doubt that the fire will get larger before full containment is achieved.

Of the other fires started on the same day by the storm, five other fires are burning, for a total of an additional 10,000 acres or so.

One thing that a lot of people don’t understand about forest fires is the difference between containment and control. Containment is when there are fire lines around the fire. Fires can still jump containment lines.

You may wonder what the time frame is for recovery to the point where the forest is in nearly the same condition it was in before the fire began. The answer is 45-60 years at a minimum. It takes that long for Ponderosa pine, Lodgepole pine, and white fir to reach maturity. Before that can even happen, the area will need to be replanted.

This area is wintering grounds for deer, elk, black bears, grizzly bears, cougars, bighorn sheep, lynxes, bobcats, wolves, and hundreds of other kinds of animals. Many of these animals didn’t escape the fire and have perished. Gradually, as the new forest grows, the area will repopulate with these animals. However, it is unlikely that this will fully happen before the forest has re-established its mature state.

Thus, the 45-60 years estimate is optimistic.

The larger the fire, the longer it takes for full recovery. Still, this is the anatomy of a typical forest fire, even though it is specifically about the Sheep Gap Fire. The major news media has given next to no coverage of the huge fires that are raging throughout the Pacific Northwest, so people need to learn about the devastation somehow. Over 900,000 acres are on fire in Montana and over 400,000 acres are burning in Oregon, but the fires are all over the Pacific Northwest, California, and western Canada.