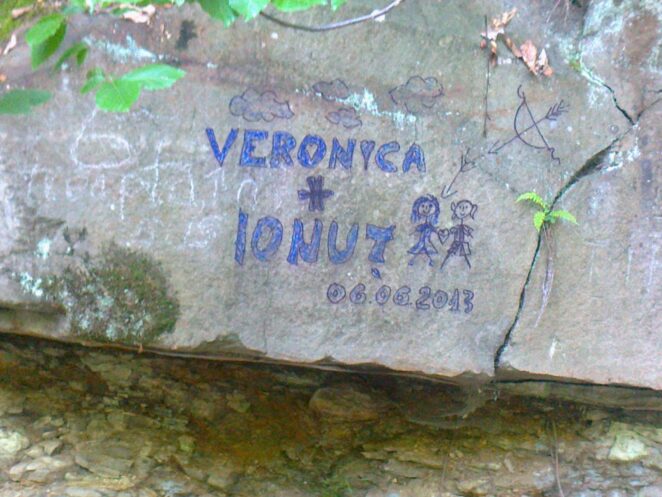 Several years ago, while walking along a forest path, I stumbled upon a drawing made on a rock that caught my attention. Usually, people prefer to carve their names on the rocks, probably thinking that this is their way of being remembered by posterity if they can’t do anything more significant in their lives, but this time the author of the inscription took a more creative approach.

Thus, instead of the ordinary habit of scratching names and dates on the rock, the nature-lover artist preferred to draw with a pen the faces and names of two humans called Veronica and Ionuț struck by Cupid’s arrows. The creator of this work of art has also informed us on the day in which this unique project was completed, which is June 6th2013, only a few days before I discovered it.

As for the message the artist wanted to convey through that creation, there was certainly no hidden meaning, it was all in plain sight: Veronica and Ionuț wanted to let everyone know that they were in love, so they shared their feelings with those fortunate enough to walk or drive on that mountain road. Several months after that I went back to that site and the drawing was still there, which means that thousands of people had the opportunity of admiring it and knowing that Veronica and Ionuț were madly in love with each other!

However, a few years later, when I returned to the same spot, the drawing had disappeared. It might have been erased by rain or destroyed by another human, or even by the author himself, who knows? The drawing hasn’t stood the test of time, but the relationship between Veronica and Ionut may have survived and I wouldn’t be surprised if similar creations were discovered elsewhere!