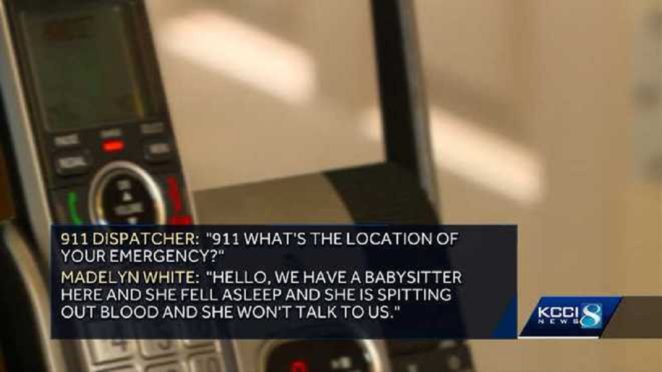 Madelyn White is giving credit to her parents Chelsea and Anthony White for teaching her how to use 911 in case of an emergency when an emergency arises in their home when she and her four younger siblings had to call the emergency operator when their babysitter Caitlin Rogers who was watching the five children while the parents of Madelyn were in the Twin Cities on a date last December.

I know if I were in Madelyn’s shoes in my parents home in Centerville Iowa with four of my siblings and my babysitter would suddenly pass out, I would be in a panic mode what to do next.

What Madelyn did was to contact her parents on the cellphone to contact them the bad news that their babysitter had collapsed to the floor with blood coming out of her mouth to ask her mother what do to next.

Chelsea was in the company of her husband Anthony when they received the emergency call from her daughter. Chelsea advised Madelyn to call 911 to report the incident as soon as possible.

Madelyn admitted that she was very nervous when she called the 911 dispatcher to report the bad news that her babysitter had passed out on the floor in the living room. The dispatcher did her best to have Madelyn calm down to give her the information so she could send medical first responders to her parents home to take care of Caitlyn who did speak to Madelyn to ask her why she was crying to show that she was not deceased which was a relief for Caitlyn who managed to keep her four sibling calm during the ordeal.

After Caitlyn was taken to a local hospital, it was determined that she had suffered a seizure which caused her to pass out on the floor. Caitlyn is now having her illness treated with medication. She is expected to make a full recovery.

The Centerville Iowa Fire Department at a meeting in City Hall rewarded Madelyn with junior firefighter and citizen of the month for her actions to save the life of her babysitter who is very grateful that a nine year old young girl acted swiftly to save her life on that fateful evening in Centerville.