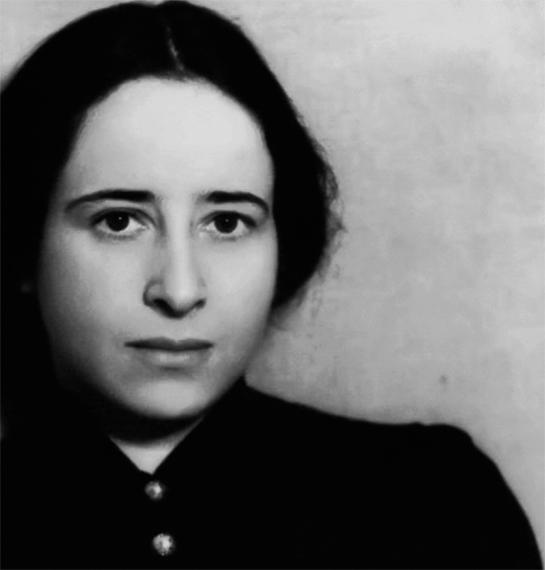 Hannah Arendt was born in Germany in 1906 where she studied philosophy but, because she was Jewish, was prevented from teaching in German universities under the Nazi regime. She fled to France in 1933 and to the United States in 1941, where she eventually became the first woman to hold a full fellowship at Princeton University. She died in 1975.

Her work was concerned mainly with political theory, but this also involved consideration of the moral basis of political actions. Towards the end of her career she became very interested in the reasons why some people in power performed evil deeds, and the spark for this thinking was the trial of Adolf Eichmann in 1960.

Eichmann had been a leading member of the Nazi regime in Germany from which Hannah Arendt had fled. His role had been to organise the removal of Jews from German-held territories, firstly by deportation and latterly by despatch to death camps such as Auschwitz-Birkenau. At the end of the war he escaped Germany and fled to Argentina, but was tracked down by Israeli agents and put on trial in Jerusalem.

Hannah Arendt attended the trial as a reporter for the “New Yorker” magazine and was thus able to observe Eichmann’s behaviour at close quarters. She used this experience to draw some remarkable conclusions about how people can respond to extraordinary circumstances.

What struck her in particular was that Adolf Eichmann did not fit the popular stereotype of a homicidal maniac. This was an ordinary man, of the same age and nationality as herself, but one who had responded to the circumstances of his time in a way that, although it seemed utterly horrific and repugnant to most people, was perfectly straightforward to him. He came across merely as a man of limited imagination who had just done the job that was asked of him.

It struck Hannah Arendt that, had Adolf Eichmann been ordered to save Jews rather than exterminate them, he would have done so with just as much dedication and attention to detail. He had not, she concluded, acted out of any fixed ideology that could be termed anti-Semitism, but from a determination to obey orders and a do a job to the best of his ability. What he had abandoned was any moral autonomy, which meant that he saw no need to think for himself or question what he was being asked to do.

This view of Eichmann, which was highly controversial and which brought a heap of criticism on her head, especially as she was Jewish and a victim of anti-Semitism, led Hannah Arendt to re-examine the moral philosophy of Immanuel Kant, who is credited with being a foremost proponent of the 18th century Enlightenment which stressed the importance of reasoning as opposed to blind obedience. This was because Eichmann claimed to be following Kantian principles, which he interpreted as meaning that the individual should always be a disciplined person who was loyal to the laws laid down by government.

According to Kant, one acts morally when following carefully reasoned precepts, wholly divorced from emotional content. One starts from basic principles, applies the laws of logic and reason, and acts out the conclusions that one reaches. It is a philosophy that is certainly not above criticism.

This thinking is often blamed for creating the atmosphere that led to the Holocaust, because the Nazis’ Final Solution was the logical outcome of a process of reasoning that began with the desire to remove the Jews from German soil. Adolf Eichmann had been very active in this process in the early days before the outbreak of war, especially in arranging the mass exodus of Jews from Germany to Palestine. However, as Germany conquered more countries and acquired more Jewish subjects, this became impossible and other “solutions” became necessary.

However, Hannah Arendt argued that this was a distortion of Kantian thinking and was indeed the very opposite of the Enlightenment philosophy that he advocated. Eichmann misunderstood Kant by imagining that he demanded blind obedience to authority. Instead, Hannah Arendt rescued Kant from this twisted interpretation by re-asserting the need for reasoned thought that incorporated moral autonomy.