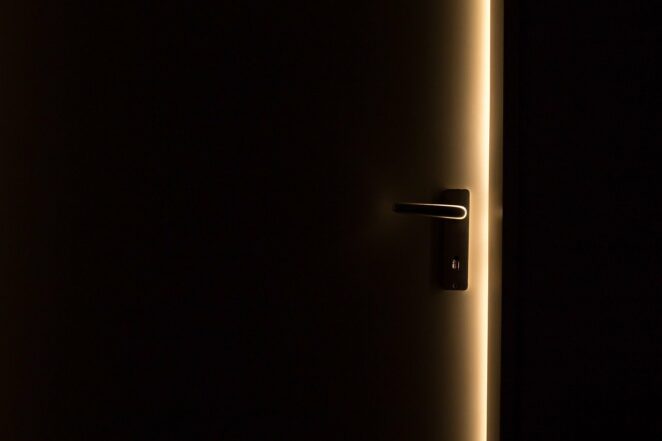 Note: This story renders an event I experienced in the summer of 2017

If I had forgotten to lock my front door, I would have had an unexpected Friday night visitor.

It was Friday night at around 11 pm. I was surfing the web on my PC while listening to a heavy metal radio show on the headphones. Whenever I make a late-night audition using the headphones I try to keep the volume at a relatively low level so, even if the show’s playlist which included new tracks from great metal bands like Paradise Lost and Lacrimosa was basically asking me to turn the volume up, I resisted the temptation because I am aware of the damage that listening to loud music on the headphones can do to the ears, therefore I could also hear any potential sounds that might have occurred outside.

While I was listening and fully enjoying a new Lacrimosa tune full of gothic melancholy, I could hear some noise on the corridor outside. I didn’t pay too much attention to it for about a minute, but the noise wouldn’t stop and it seemed as someone was right at my door, so I had to interrupt my audition, and as soon as I took the headphones off my ears, I was shocked to realize that there was indeed someone at my door, trying to open it, probably with a key!

Fortunately, the door was locked, but that person was persevering in the attempt to open it at any cost, so I went on the hallway, looked on the peephole and saw a bald man, probably in his fifties, which I was quite sure that I hadn’t seen before. He seemed a little confused, he probably couldn’t understand why the door refused to open, so I said to him in a loud voice: “What are you doing here?  What do you want?”

He muttered something which I couldn’t understand very well as he was definitely surprised to hear my voice. I had the impression that he had told me his name; anyway, I realized that he had no evil intentions. He had probably enjoyed several drinks at a pub in the town, and he was at least tipsy, if not drunk, and he had simply lost his way in that maze of alcohol.

“You’re at the wrong address,” I shouted at him, “you don’t live here!”

The bald guy realized that he had made quite a big mistake and he was quite embarrassed, so he mumbled some apologies to me. I accepted his excuses and he moved on in his search for his true home. I hope that he found it and, after waking up with a terrible hangover, he promised himself that he would drink more responsibly from now on so that he wouldn’t forget again where he lived.

That was my short, but thrilling Friday night adventure. If there’s a lesson I have learned, it is a very simple one: Always keep your front door locked because you never know who might try to enter your house, and you might find yourself in the company of some truly unwanted guests!