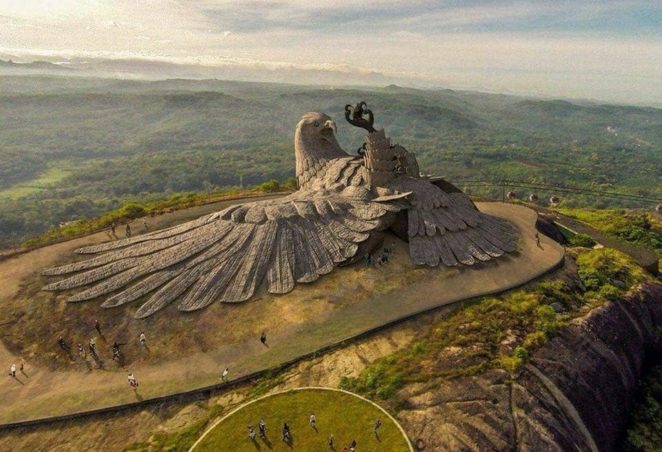 According to the information in the figure is the largest statue of birds on Earth. It is located in the Indian state of Kerala, which is in the south of India. Huge concrete statue Jataiu built on a wall called Jataiupara (para wall means in Malayalam). The sculptor of the statue is Rajiv ANCAL. The colossal statue of a length of 200, 150 wide and 70 meters high, which is becoming the largest bird statue in the world … Jataiu is the embodiment of courage and chivalry. According to legend, the name Jataiu birds / otherwise, it is a female / who, risking their lives, struggling to save the city from the kidnappers. … In the fight injured Jataiu has lost a wing and so wounded he landed on a rock. Over time, the wall is named Jataiupara. Jataiu the sublime tribute to women’s safety and honor. Jataiu also a past period when people, animals, birds and other life forms, who care about each other, they began to live peacefully on Earth. According to the author Rajiv ANCA, the symbolism is of great importance to today’s social scene as the rate of crime against women at a high level. The capital of this country is Thiruvananthapuram.