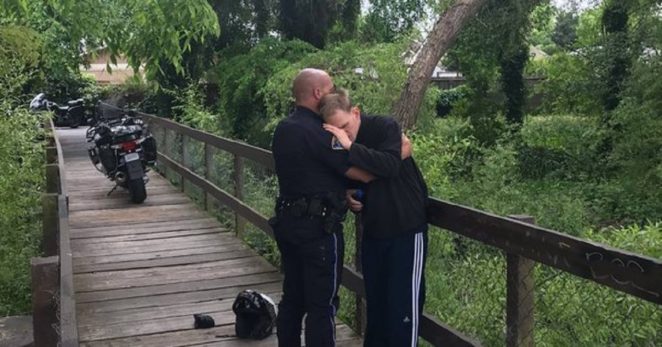 Lance Grumley who is 31 years of age who suffers from autism made an error in judgement when he left his home in Rohnert Park California where he lives with his mom Diane Grumley by leaving the home without her supervision.

Could you imagine the displays of emotion of anxiety and sadness when Diane found out that her son was missing when he decided to take a walk away from his home without his mother’s permission?

Diane at the time of her son’s disappearance asked her neighbors if they had seen her son. The neighbors reported seeing Lance taking a walk toward a bike path. When Lance was not found anywhere near the bike path, Diane called the Rohnert Police Department to report the news.

Rohnert Police Officer Justin Thompson who personally knows Lance as a family friend traveled by motorcycle to try to find Lance who must have walked away from his mom’s home to take a walk but he must have gotten lost on the way.

Officer Thompson was able to locate Lance in a creek on a bike path that was raised above the water. Officer Thompson showed Lance his heart of kindness by giving Lance a hug before he took him home to reunite with his mother safe and sound.

The lesson to be learned is that police officers have been trained to deal with adults with special needs by bein nice to them when they are anxious and scared during their journey of life.