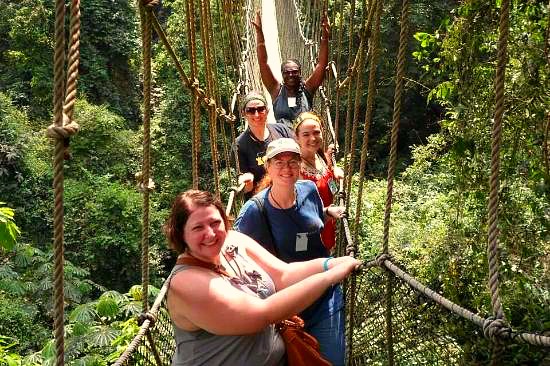 The Kakum National Park at Cape Coast, Ghana, where I was born.

Once a journalist asked Chinua Achebe, one of Africa’s greatest and international known writers, the reason he hasn’t written any book about Europe and America. Achebe responds saying that a lot has already been written about those two continents.

Yes, there are thousands of European and American writers, but only a few write about Africa. The reason my articles and books reflect on my culture as an African writer, despite living in Europe for many years.I know that there are hundreds of readers interested in non-fiction genre of books, thus; one of my goals is to share my non-fiction books through the diversity of culture.

My utterly and compelling collections are destined to capture the reader’s attention and interest, to learn about other people’s culture, heritage and above all how Africans live.My books are in the categories of travel, immigration, health and entertainment. The personal account reflects on the places I lived or visited in Africa, such as Ghana, Guinea, Nigeria, Ivory Coast, Sierra Leone, Togo, Benin, and Gambia.

My experience in Europe as an illegal immigrant before I had my documents was tough as well like when on ‘The Road Of Agony’ in Africa but in different situations. It’s about life in Barcelona, Spain, Aarhus, Denmark, England, Amsterdam, Holland, Rome, Italy and Antwerp, Belgium.Reading articles about Africa on the internet is different from one giving an account of his experience as an African.The African stories act like a guide to Europeans and Americans willing to visit Africa as a tourist or one to set up a business.

The books will teach you how to avoid being a victim to thieves, armed robbers and immigration crooks, that prey on nationals and foreigners, while the Europeans stories teach Africans how to survive in Europe, without papers, drug trafficking, and crime.

It also warns Africans to avoid the temptation of coming to Europe because Europe doesn’t make one rich overnight as many in Africa believe. Many ask the reason some of my books have sad titles. For example, ‘The Writer Died, Road Of Agony, Overseas Chronicles etc. Each title reflects on the story, but the books have its humorous part too.

I refused to die when I was carried away by the sea. I survived when knocked down by speeding car catapulting me meters high and landing on its bonnet. I fought for my freedom when kidnapped by three armed robbers. I was homeless sleeping at the central train station in Rome. I was beaten up mercilessly by an immigration officer who later stole all my money from me.

If you live a kind life from your youth, the cultivation of being respectful, humbleness, and faith can help one to endure trials and tribulations. I simply took that “Whatever happens to me benefits me,” the reason I am living today. Everyone will die but if it’s not yet your time and someone wants to take it fight with all your might to live.

Explore the humane, captivating and emotional account of Joel Savage’s books, that will keep you turning the pages late into the night. Thank you for reading.