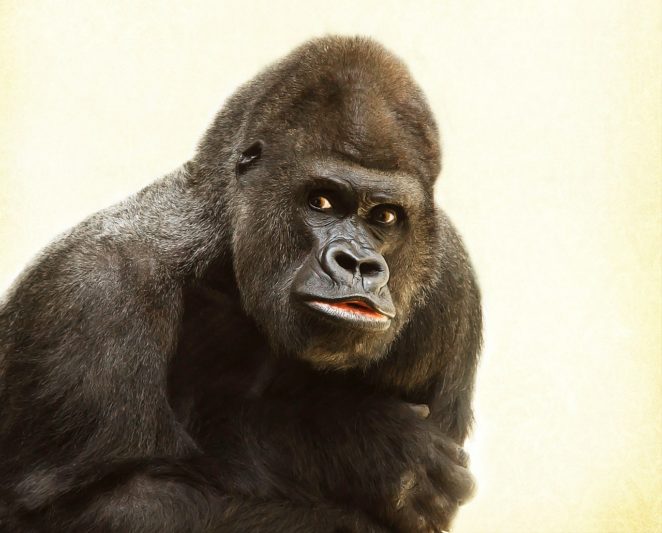 At the risk of stating the obvious, you don’t see many gorillas in the South of England, in the middle of  the leafy county of Surrey, much less walking around university campuses. But back in my student days at Surrey University, I was treated to a personal sighting of one of these great apes. I am glad to say that there were some eyewitnesses apart from me, so I can confirm I was not drunk, mad, delusional, high on drugs, etc (Student life can be pretty wild after all,  but I swear I was compos mentis, stone-cold sober and drug-free when I witnessed this extraordinary event).

The bizarre wildlife sighting in question happened one day when I was visiting the office of the university campus radio. The latter was a radio station run by other students, broadcasting solely for the uni, to entertain and  keep everyone informed about relevant student matters. I was thinking of volunteering to present one of their shows, hence why I went in to meet Nigel, the guy who ran the station, a fellow student. A couple of other interested parties were in there at the time as well, all of us in the small office together, Nigel telling us about the radio and what the voluntary part-time presenting job involved.

The radio office was central to the campus and high up, on the third floor of a building, looking out over the main quadrangle, with its lecture theatres and tall accommodation buildings, bushes, flower-beds, and trees. i.e. lots of greenery. You get the idea.  It was almost like being in an eagle’s eyrie, as we had a bird’s eye view from there. As we were talking, I noticed that one of the other students was staring out of the window at something. I naturally looked round, and to my astonishment, there, marching confidently across the campus, in the company of some others, was someone in a gorilla costume, an eye-catching vision of black hairiness against the green of the bushes. Naturally this caught all of our attention, and the “gorilla” then became aware we were staring at him. This provoked a display of aggressive alpha-male behaviour: first of all he waved, but then decided to assert dominance. He started vigorously beating his chest, and then, as if to make his point all the more, turned round and bent over, and suggestively waved his bottom at us.

As you can imagine, by this point we were all in fits of laughter in the radio office, and Nigel quipped:

“Now is probably the time to get on the radio straightaway to announce: ‘There is a mad gorilla loose on the campus!’”

The gorilla and his pals then passed out of sight round the corner of a building, and we were left to conjecture who he was, and what the costume was about. We concluded it must be some kind of charity thing he was doing, but I never found out for sure. A teasing eternal mystery…..

(Assuming it was actually a man in a gorilla outfit, and not an animal who had escaped from the local zoo, Chessington. Maybe the others were escorting him off the campus, before he ran amok there. Well, I guess you never can tell, can you?)