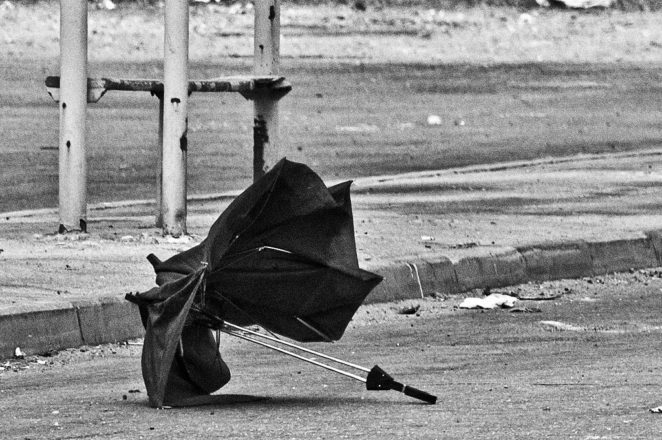 I once, when I lived in London, had a friend who spared no expense when it came to buying umbrellas. Not for him the cheap foldaway versions that you can slip into a briefcase and which can be bought for very little from just about anywhere. No – his umbrellas were of the best quality, long, slender and with perfectly moulded wooden handles. An umbrella, for him, was something to be seen with, not just to keep the rain off. Indeed, he always carried a brolly whether it was likely to rain or not.

I was with him once when we were negotiating our way through the London Underground. It was not the height of the rush hour, so the trains were not all that frequent. If you had just missed a train it could be 20 minutes or more before the next one that was going to where you wanted.

We reached the platform just as a train was about to leave. We knew it was there and so we ran down the escalator and along a short passage on to the platform. The carriage doors were starting to close – we were obviously just too late and had no chance of catching it. There was no choice but to wait for the next one.

However, my friend had other ideas. He knew, as did I, that if you can prevent the train doors from closing they will open again and let you get on board. Grabbing a door, or sticking a foot into the gap, will usually do the trick. However, we were not close enough to do this, so my friend did what he thought was a stroke of genius – he lunged forward with his umbrella and managed to get it wedged between the closing doors.

Naturally, he expected the doors to re-open, but on this occasion he was wrong. The beautifully pointed end of his expensive umbrella was just too slender to register as an obstruction that would force the doors apart and they stayed firmly shut, with the umbrella just as firmly trapped between them.

The train then started off up the platform, with my friend desperately trying to tug his umbrella away from the doors. Of course, the train was soon going faster than he could run and he was forced to let go.

The final indignity came when the train door in question disappeared into the tunnel at the end of the platform and the protruding umbrella was smashed to pieces against the tunnel wall.

It was an expensive lesson to learn!