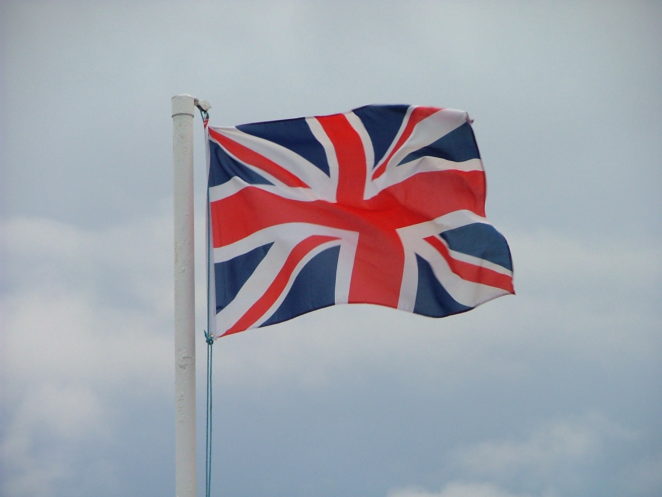 Many people who fly the Union Flag (of the United Kingdom) manage to get it upside down, without having a clue that this is what they are doing.

What is often called the Union Jack is not as symmetrical as it might look at first sight. When you turn it over – either vertically or horizontally – it is not the same.

(The right way up)

Have a close look at the narrow red ‘X’ and put a ruler against it to cover where it is hidden behind the broad central cross. You will see that it emerges from behind the cross in a different position. It was closer to the bottom of the white ‘X’ when on the top left, but not when on the bottom right. It appears to have hopped over when out of sight!

These subtleties are what makes it possible to fly the flag upside down.

The rule is that, in the top left-hand quadrant, the portion of the white stripe above the red stripe must be broader than the portion below the red stripe, on the ‘hoist’ side of the flag. This needs a word of explanation.

Because flags are made to be flown from flagpoles they have toggles on one side so that they can be attached to ropes and then be hauled up and down. A length of cord, covered by a piece of canvas, runs up the edge of the flag with the toggles at each end, top and bottom. The canvas therefore makes it clear that this is the ‘hoist’ side. The other side, the one that flaps in the wind, is, not surprisingly, known as the ‘fly’.

Flags are often displayed on paper or other media without any indication of toggles or cords being present. However, the general convention is that they are shown with the hoist to the left and the fly to the right. It is still therefore possible to state that a flag is upside down even if it is not being shown ‘in flight’.

Your flag is upside down!

To pedants like me, it certainly does! There is a convention that the Union Flag flown upside down is a signal of distress. However, if my ship was sinking I think I might try a less subtle means of calling for help!

It always annoys me when I see scenes of jubilation with small children waving flags on sticks which have been bought for this purpose, but which have been attached to the sticks the wrong way up. Just watch any occasion on which children wave flags for the Queen and see how many of these are upside down – it is always a high proportion!

Do other national flags have the same problem?

National flags seem to fall into three categories in this respect. There are some that would never be flown upside down because it would be blatantly obvious from the outset – those of the USA and Australia, for example.

Then there are those that are horizontally symmetrical and it makes no difference which way up they are flown – the flags of Japan and France come to mind here.

However, there is also a category where it makes (almost literally) all the difference in the world. If you fly the flag of Poland upside down you get the flag of Indonesia!