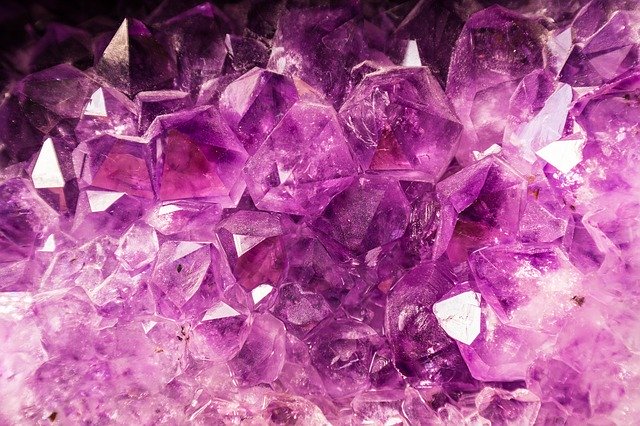 One of the first quizzes I published at this site was about gemstones.  How Much Do You Know About Precious and Semi-Precious Stones?  I don’t want to give away any of the answers but one of the questions mentions amethyst.  The color of the amethyst is purple or violet. People believe it has healing properties and used to believe that it was a remedy for drunkenness.  (If only that were true.)

This stone had its place in the history of 3 ancient civilizations: Egypt (found in the tombs of Pharoahs), Israel (one of the 12 stones adorning the breastplate of the high priest), and Greece (the people believed the stone had been created by the god Dionysus).

Amethyst used to be on par with the diamond as a priceless and rare gem and it made its way through history being regarded as a precious jewel used by people who wanted to signify their royalty or those who wanted to show off their wealth.  However, in the 18th century, large deposits were found in South America; and today this quartz stone can be found all around the world.  The stone may have lost its monetary value but it did not lose its beauty.

February is Amethyst month: A famous set of amethyst jewelry are Queen Mary's Amethyst Parure. It is made up of a collection of amethysts, primarily oval and framed by diamonds. The tiara includes large oval amethysts. View here: https://t.co/Og0dWIQPIA #amethyst #queenmary pic.twitter.com/zc6JWNjbWI

Because of its wine-like color, early Greek legends associated amethyst with Bacchus, the god of wine. Click below to read more about amethyst on our blog! #FainiFacts #Amethysthttps://t.co/ZqXjDlLGlL pic.twitter.com/hkwg2j5Uxe

Did you know that #amethyst is referenced in the #bible and is considered one of the precious stones in the breastplate of the high priest, while Tibetan monks used #mediation malas (prayer beads) made out of amethyst, as it is considered a sacred stone. https://t.co/f2XEiNbgy6? pic.twitter.com/QFn5rNSWt8

#Amethyst (The Intuitive Eye) – Explained by @energymuse! .
Despite it’s prevalence, amethyst has been one of the world’s most revered stones for many centuries. Found in as many places as Brazil, Bolivia, Mexico, Africa, Canada, Russia, USA and Europe,… https://t.co/03nXdxTlgp pic.twitter.com/je1oniMFYB

The #History and #Legends of #Amethyst, The Royal Stone of Kings ~ https://t.co/tSl0wtZT2l via @flipboard #gemstones #ancienthistory #Egypt #Israel #Greece #SouthAmerica