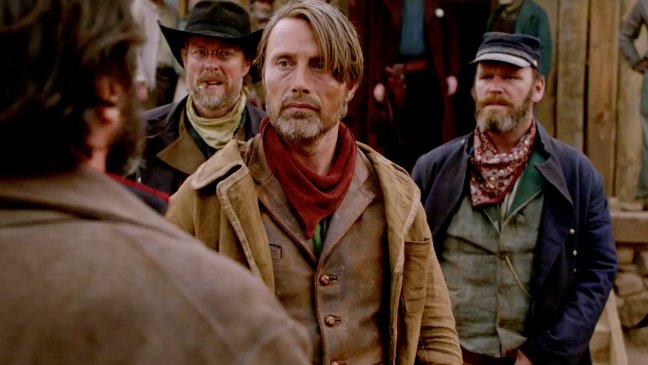 I love a good western and this is one, the extra twist being it’s a multi lingual Danish one. Director Kristian Levring has only made 5 films in 28 years and so why not a western on his CV?  To be fair it’s very hard to make a bad western as you just need an anti hero, a bad guy dressed in big boots and black and a damsel or two in distress. We have all that and some here and the Red Indian threat and cavalry ready to ride in when needed.

Its eclectic cast stars the brooding Mads Mikkelsen in the lead with smoldering French actress Eva Green as the token totty and none other than Eric Cantona as the bad guy’s right hand man. It would, of course, be a James Bond reunion for Mads and Eva from Casino Royale.

Jon (Mads Mikkelsen) and his brother Peter (Mikael Persbrandt) have returned home from the second Schleswig War (1864) with Germany and the defeat of the Danish Realm, migrating to the United States to start a new life as homesteaders in the Wild West between the Mississippi River and the Rocky Mountains. Seven years later, Jon’s beautiful wife Marie (Nanna Øland Fabricius) and his all grown up 10-year-old son, Kresten (Toke Lars Bjarke), arrive on the steam train.

The happy family boards a stagecoach after all those years apart bound for their small homestead while Peter stays behind. A late switch means they will be sitting opposite two ‘wrong uns’, the swarthy gunmen Lester (Sean Cameron Michael) and Paul (Michael Raymond-James). Needles to say it turns out real bad and Jon devastated and broken when he arrives home.

Unbeknownst to Jon, the now dead Paul (he deserved it) is the brother of the fearsome Henry Delarue (Jeffrey Dean Morgan), a notorious gang leader and land baron who runs the town Jon lives nearest. Upon hearing the news, Delarue rides out to Black Rock and kills three innocent citizens of the town that reports the deaths to him for stage one of his revenge, including a slug in the head of an old woman, in front of the sheriff and his deputies, who are powerless against him. They pay his gang, on behalf of the town, protection money every month and don’t seem to get much protection. He warns the townspeople to cooperate and find his brother’s killer or three more will be killed in 24 hours. 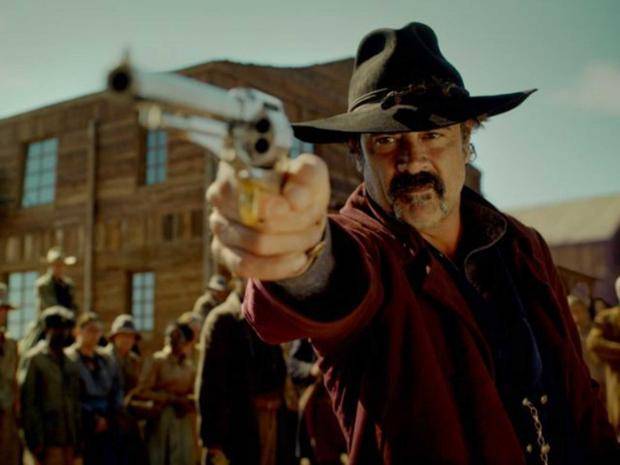 After burying his wife and son, Jon decides to leave the town with Peter and sells his land to Keane (Jonathan Pryce), Black Creek’s mayor and undertaker. But, just before they saddle up their wagon they are captured by the town Sheriff, Mallick (Douglas Henshall) and his deputies, thrown into jail to be handed over to Delarue as Jon sits dejected in his cell, the sheriffs plan to buy the town more time while he tries to alert higher authorities of Delarue’s actions. The town full of coward’s and needs two good men to fight back against the gang but those two men are locked up.

I have to say I have seen a thousand Westerns but if the ingredients and stereotypes are there it’s the one genre that can get away with that. We want to see the high noon gunfight; we want to see the wronged hero return to save the town and a rifleman on the top of the saloon roof shooting the gunmen down with the mincing stubble. All of that is here and some. The sheriff is a coward; dusty boots clunk on bar room floors and girls menacingly project their bosoms. Bring it on, the twist here being the heroes are brooding and speak a funny language.

It’s violent but in a cartoon, hold your heart when you are shot, kind of way and with pounding music and racing stagecoaches its familiarity in its appeal. Mads Mikkelsen often plays seedy characters that way Philip Seymour Hoffman did because of his likewise face and so nice to see him here in a hero macho role. Eric Cantona’s appearance in his blossoming acting career that never seems to bloom has another performance hardly registering here. They dot trust him with many lines.

a suitable vendetta on both sides. I have seen better modern Westerns and this not the gritty authentic stuff like Open Range or the Coen Brothers True Grit or the cool of Slow West but more The Proposition and 3:10 to Yuma but it is entertaining and that’s all that matters. It it pops up on TV then watch it guys.

Globe & Mail –‘In an untamed world where hypocrisy is loud and where no one can be trusted, salvation is one’s own business and actions speak louder than words’.

The New Yorker –‘It could be Danish filmmaker Kristian Levring’s answer to the spaghetti western (this one shot in South Africa with American landscapes CGIed into the background) with a sensibility that echoes the savage frontier novels of Cormac McCarthy’.

Turkey Today –‘The Salvation is an enjoyable film, especially in terms of old-style genre filmmaking. It will certainly become a form of salvation itself, among the hordes of CGI blockbusters’.

Film Ireland –‘The pace of the film is slow, tense and anxious, built upon a motivation for revenge between two antithetical men, who are united through a shared destructive ideology, cementing the absurdity of human ideals.

The Star –‘It’s dull. It’s literally, if not metaphorically, bloodless’.