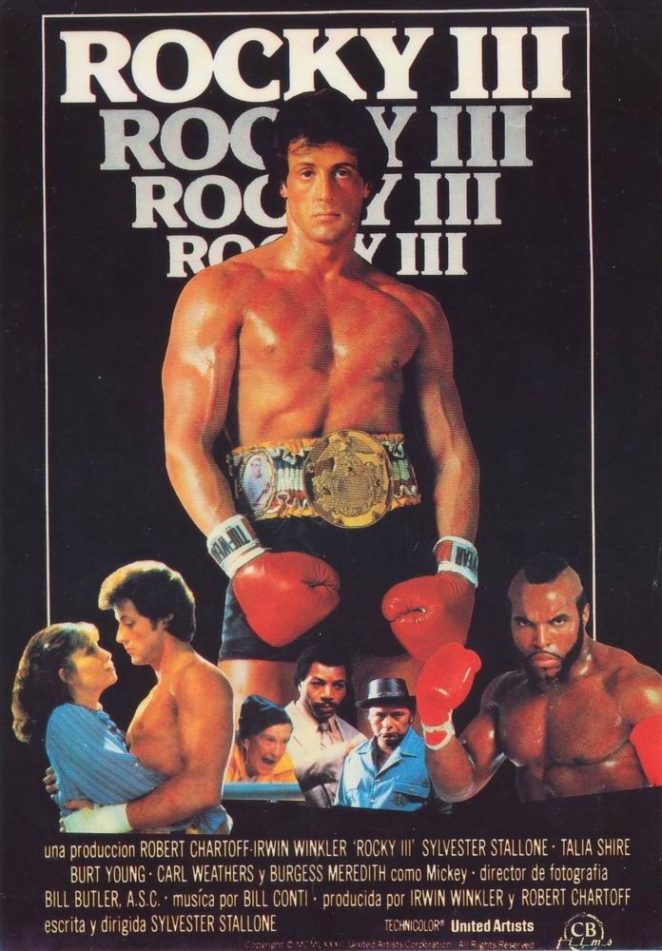 The motion picture “Rocky III” which came out in 1982 was in my opinion the best of the six Rocky Balboa movies which does not include “Creed” which stars Michael B. Jordan as Donnie Creed who is the son of the late Apollo Creed (Carl Weathers).

The movie story advances three years later when Rocky Balboa had ten heavyweight title defenses against “good boxers” when a new boxing rival James “Clubber” Lang (Mr. T.) is the number one contender for the heavyweight championship that is held by Balboa.

Rocky at a ceremony where a statue of himself is dedicated in Philadelphia Pennsylvania outside a museum when Lang called out Balboa for “ducking him” and not being the “People’s champion” when Rocky’s trainer Mickey Goldmill (Burgress Meredith RIP) told Lang he was not going to get a title shot despite his ranking as the best boxer.

To put it mildly Rocky was shocked that even though he wanted to retire from the sport of boxing so he can preserve his legacy, a challenger comes out of the blue to challenge him to a boxing match that would give closure to Rocky’s legacy as one of the best heavyweight champions of all time , his trainer told Lang “No means no.”

The two boxers agree to have a championship boxing match in Philadelphia would signal the end of Rocky’s boxing career when Mickey suffered a heart attack before the bout which affected Rocky’s ability to focus on fighting Lang who humiliated him at the statue ceremony by asking Adrian Balboa (Talia Shire) to “go to bed with a real man.”

Adrian then has an argument with Rocky in a beach in California when Rocky’s training sessions with Apollo was not going well. When Adrian was able to get Rocky to confess that he was “afraid” of Clubber Lang, it revived Rocky’s desire to get his groove back in the training session with Apollo and his trainer Tony “Duke” Evers (Tony Burton RIP) since Adrian advised her husband if he lost to Clubber Lang in the rematch in Philadelphia he could live with himself since she probably knows the saying from the late George Halas who was the former coach of the Chicago Bears which is “No man who ever gave his best ever regretted it.”

The rematch ended with Rocky defeating Clubber Lang by knockout in the third round of the boxing match in Philadelphia but the reason Apollo agreed to train Rocky was that he wanted Rocky to have a rubber boxing match at Mighty Mick’s Gym after the bout with Lang.

Who won the rubber boxing match remains a mystery since the movie ended with both boxers hitting each other at the same time inside a boxing ring that no one attended. Overall it was a great motion picture since the lesson is to face your fears and do not be afraid of failure in life.