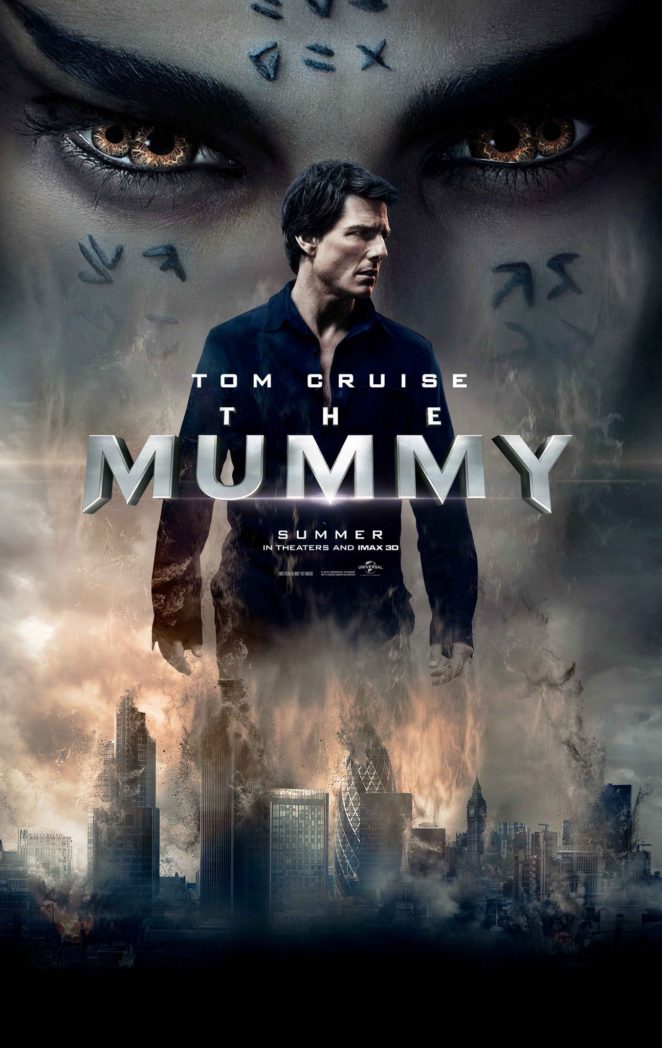 The Mummy is a 2017 American action-adventure film, a reboot of The Mummy franchise, and the first installment in the Dark Universe film series. It was premiered at State Theatre in Sydney, Australia, last May 22, 2017, and was released in the United States on June 9, 2017, in 2D, 3D, and IMAX 3D.

The story is about an Egyptian princess named Ahmanet, played by an Algerian actress Sofia Boutella (Jaylah of Star Trek Beyond), who was cursed after for all eternity and was buried alive , after she killed her father and his family in order to resurrect Set as the God of Death. Until one day on recent times, Sergeant Nick Morton, played by Tom Cruise (Ethan Hunt of Mission Impossible), a US military man, who unintentionally unearthed her tomb, together with his companions, namely Corporal Chris Vail, played by Jake Johnson (Lowery of Jurassic World), one of his friends and closest ally, and Jennifer Halsey, played by Annabelle Wallis (Mia of Annabelle), a feisty and intelligent archaeologist who had a past with Nick and secretly works for the monster-hunting organization known as the Prodigium.

Nick became haunted and was possessed by Set after Princess Ahmanet put a curse on him. So he was abducted by Dr. Henry Jekyll, played by Russell Crowe (Maximus of Gladiator), a brilliant scientist who runs an organization called Prodigium where Jennifer works too. Prodigium is an organization dedicated to locate, contain and destroy monsters or any other supernatural entities.

Also in the cast were: Courtney Vance (Miles Dyson of Terminator Genisys) who played as Colonel Greenway, Nick and Chris’superior officer; Dutch actor Marwan Kenzari (Druses of Ben-Hur) as Malik, Dr. Jekyll’s chief of security and a member of Prodigium; Spanish actor Javier Botet (The Leper of IT) who played as Set, an ancient Egyptian god of death, who aided Princess Ahmanet in her quest to rule Egypt; and British actor Selva Rasalingam (Jesus of The Gospel of John) who played as King Menehptre, a pharaoh and a father of Ahmanet, whom she killed.

From a production budget of $125 – $195 million to a grossing-income of just $390.2 million, this movie received negative reviews from critics, and was labelled as one of the box office disappointment in terms of its high production and advertising cost.

Universal Pictures just made an announcement that its series of films known before as Universal Monsters film series would be known as Dark Universe. Since, The Mummy is the first installment, what comes next is that they will release the second installment on February 14, 2019, entitled “Bride of Frankenstein”. So there will be possible crossover movies for all monsters once stand-alone installments are all done, just like Marvel and Dc’s. No clearer updates yet, for possible sequel of The Mummy, but crossover role for Tom Cruise for The Mummy might be possible.

So guys, if you would like to see a movie that’s something about Egypt and their creepy monsters called mummies, this movie will surely fits your taste. Though, this movie got some negative reviews, I still strongly recommend this one. It still has the nicest effects and graphics are quite above average. And the best thing I like this movie is that it has one of the best endings that you should need to watch. I’m sure you gotta like its ending too. A nice twist at the end of the film that will surely make you wonder why. So I’m not gonna spoil this movie for you to watch.

Another two-thumbs up and a 5-star movie for me. Remarkably one of the best action-adventure movies so far this year!