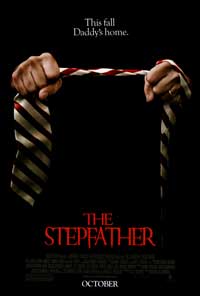 The Stepfather has a list of great actors, which includes Penn Badgley, Dylan Walsh, Sela Ward, and Amber Heard.

The Stepfather is about this man, David, who creates different identities and finds his way into families (divorced or widowed mother) just to murder the family. He comes off as this really nice, genuine guy but eventually seems untrustworthy. Everyone thinks that David (Walsh) is this perfect guy, except for Michael who believes from the beginning that he is not who he says he is.

During the film, more and more people find flaws in David and are sure he is keeping secrets. It is not till the last half hour or so of the film that the mother (ward) finds out that David is a crazy lunatic killer. It’s not hard to know the truth after he attacks her family, almost killing them.

Short synopsis of the film….

The movie starts off with David changing his look so he can become the next character (or identity). He dyes his hair, shaves his beard, and puts in different colored contacts. Afterwards, it shows him walking into a room of portraits of the family that he had just murdered. As “Silent Night” is playing, the scene moves into other rooms of the house showing the family who he had just killed the night before. Not a very merry Christmas for them. During this scene specifically you learn what kind of a character this man (or should I say criminal) is.

In one of the next scenes, the criminal, Davis Harris meets the family who will become his next victim. He puts on the charm, and shows Susan (Ward) that he is the perfect guy, and they end up engaged 6 months later.

Afterwards, Michael comes home from Military school to see the new guy in his mother’s life, and sees that he may not be the guy that he says he is. However, it is not hard since David is secretive, and easy to anger. David also will find a way around giving out any thing that will give him an identification (ie. he pays only in cash). Anyone who gets in the way of his plan will end up dead as well.

To me, the story line is played out well through the scenes. There are not any scenes that are not needed or that take away from the story.

The critics, for the most part, gave The Stepfather a bad review. Most said it was lacking from the original film that came out in 1987. From the critics, it was given a ranking average of 3.4. My ranking on the film was more around the area of 7 or 8. I have not seen the original, so I do not have that to compare the 2009 remake to.

If you have seen the film, what would you rank it?