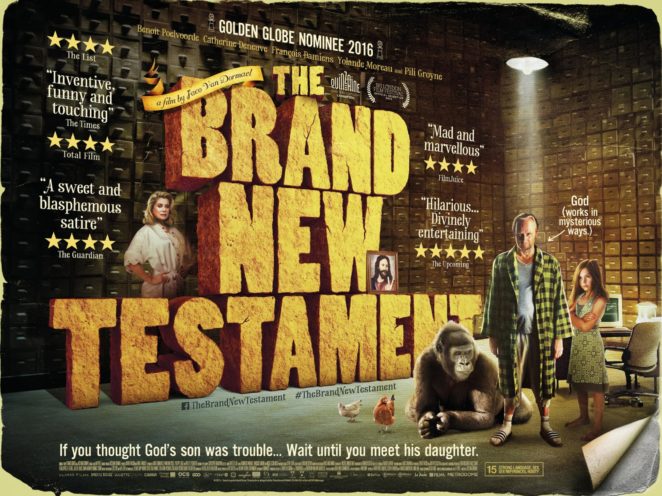 I enjoy a good foreign film and this is one of them. It’s from Belgium and entered as there Oscar entry for 2016 in Best Foreign film Category and nominated for a Golden Globe that year. It’s a comedy about religion that didn’t actually produce placards outside the cinemas for once, mainly because not many people saw it. It wasn’t remotely offensive in any way to be fair. It even depicts God as a bitter angry middle aged hard drinking man who beats his kids, and still no protests. Who knows, maybe he was. Or was he a she?

God (Benoît Poelvoorde) is bored stiff and so creates Belgium on the first day, filling it with various animals until he decides on humans. Today he lives in a grotty mysterious Tardis like apartment in central Brussels with his put upon wife (Yolande Moreau) and 10-year-old inquisitive daughter Ea (Pili Groyne). He spends his days on a super computer that he can program to mess around with humans with rubbish laws, which he does with glee, his plan to pitch humans against each other so they always seek out him, God, for forgiveness so to keep him relevant. But the kid has had enough of his cruel ways and plots to escape after dad gives her one beating too many. She has never left the apartment before but her miniature talking Jesus Christ statue on her dresser (shrunk for his sins by God, we presume) encourages her to go for it and instructs her that the escape route is through the washing machine in the laundry. He also tells her she will need to find apostles out in the real world and to rewrite the New Testament to correct all her father’s sins.

Ea sneaks into her dad’s mysterious office and fires up the computer. She then sends a death text to every human on earth, foretelling the day they are set to die, having a profound effect on humans and undermining God. Diving into the washing machine soon after a tunnel leads her to a launderette on the outside world, soon to be pursued by a furious father.

The first person she meets is a tramp (Serge Larivière). He is kind to her so she makes him the official writer of the Brand New Testament. She now has to find her six apostles, adding to the original 12 in the Last Supper painting, choosing 18 as the new number as a tribute to her mom who loves baseball, a sport that has 18 in the team.

Apostle number one is a reclusive pretty young woman (Laura Verlinden) who lost her left arm in a subway accident and feels nobody will love her now. The second is a middle-aged bloke (Pascal Duquenne) who hates his work and his life, refusing to move from his favorite park bench now that he knows his death date. The third apostle (François Damiens) is a sexually frustrated man who is gauche around women and still pines for a beautiful German girl he once saw at the beach as a young boy.

The fourth apostle (Pascal Duquenne) is a man who is fascinated with death and killing. Now he knows his death date he revels in his hobby and buys a snipers rifle to randomly shoot people. Since all death dates are already predetermined, they cannot be his responsibility, is his warped thinking. The fifth apostle (Catherine Deneuve) is an elderly rich woman trapped in a loveless marriage, especially now that her husband knows he will outlive her by 10 years. The final apostle is a sickly boy who, when he discovered he had only days left to live, decided to live them as a girl.

Gods Law 1522: If one day you fall in love with a woman there’s a great chance you will not spend your life with her.

I really enjoyed this, funny in all the right places, inoffensive and strong comic performances by the cast, even some pathos nestled in between the wackier scenes. Catherine Deneuve is the name to try and sell the movie and get it out there and has the craziest of all the scenes in it – which involves her snuggling with a gorilla. I will say no more.

It cost $10 million to make and did $16 million dollars world–wide, not a bad return for a Belgium movie without Jean Claude Van Damme in it. The ideas are playful around God and subservience so no need to get offended there. There is a clever edge to it through the scripting and a little pop at religion here and there.  But it’s just a different and clever movie and so lifted above the rest as far as comedy goes.

If you like foreign movies I would fully recommend this as it has the European quirky edge and gentle humor and characters that make European film so watchable.