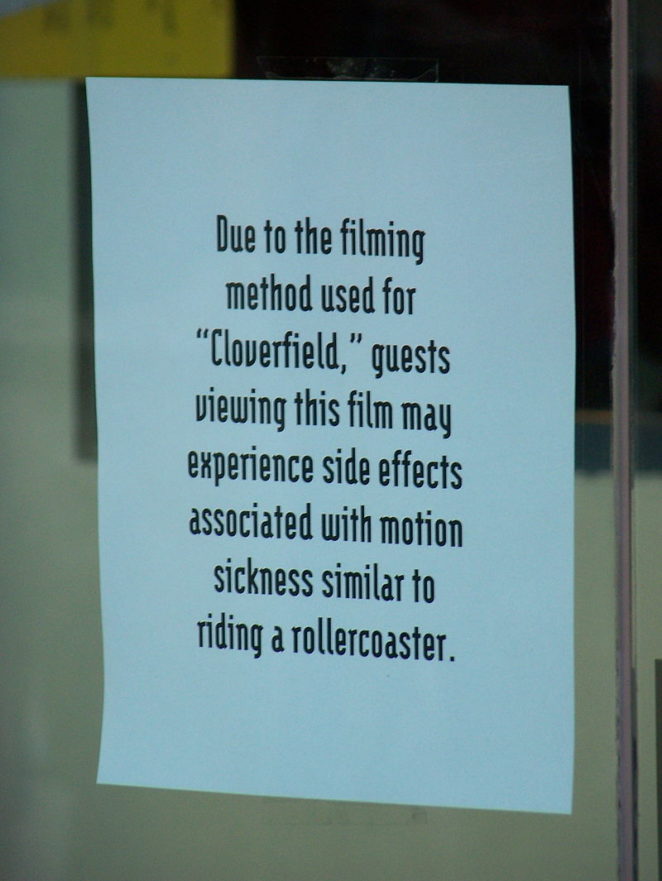 When I first saw the trailers on television for “Cloverfield”, I was thrilled. An honest-to-goodness monster movie was coming to the screen…something that I hadn’t seen for quite a while.

CASTRobert “Rob” Hawkins – Michael Stahl-DavidHudson “Hud” Platt – T. J. MillerElizabeth “Beth” Makintyre – Odette YustmanLily Ford – Jessica LucasMarlena Diamond – Lizzy CaplanMike Vogel – Jason HawkinsTravis – Ben FeldmanStaff Sergeant Pryce – Billy BrownI will do everything I can not to give you too many “spoilers” in my description:A video camera is found in the area “formerly known as Central Park”. The video is part of the “Case designated Cloverfield” by the United States Department of Defense.The movie then goes back in time to May 22 and 23, 2009. A rather large, boisterous going-away surprise party is being held for Rob in a New York City apartment by some of his friends. Rob has accepted a job in Japan. Hud has a hand-held digital camera and is documenting the whole affair for Rob to take with him as a remembrance of the evening with all of his friends.Beth shows up at the party with a date. Rob had a platonic friendship with Beth which then turned into an intimate one. Rob and Beth go out into the hall and have a heated discussion; and Beth and her date leave the party.Shortly after midnight there is a huge blast which rocks the apartment. The lights of the city go out and then come back on. Immediately there is coverage on the local news station; and party-goers gather around the TV. The newscaster reports that it is believed that there has been an earthquake in Upper Manhattan; and an oil tanker has capsized near Liberty Island.Some of the group go up to the roof. Suddenly there are explosions; and flaming shrapnel drops amidst the crowd. The guests run screaming down the apartment steps and out into the street, having no idea what is going on. Suddenly the head of the Statue of Liberty lands in the street and someone yells, “I saw it! It’s alive!”The crowd is instructed by loud speakers to cross the Brooklyn Bridge and get out of the city. Rob, Jason, Lily, Hud and Marlena head for the bridge. While on the bridge, Rob realizes that he has a message from Beth on his phone; but his battery dies. After crossing the bridge, he goes into an electronics store that is being looted and picks up another battery. He listens to Beth’s message and is horrified. Beth is trapped in her apartment and can’t move. Rob decides that he has to try and save her.The movie was directed by Matt Reeves, written by Drew Goddard and produced by Bryan Burk and J. J. Abrams (“Lost” and “Alias”). The movie was shot mostly with a Panasonic HVX200 digital camera for the interior shots and a Cine Alta F23 high-definition camera for the outdoor shots. The action was followed with a hand-held camera, ala “The Blair Witch Project”. Cinematography was done by Michael Bonvillain and T. J. Miller (“Hud”) and runs for 85 minutes. Budget for the film was $25 million; and the movie made approximately $170 million at the box office.Viewers either loved this movie or hated it. I loved it. I understand the reason for the use of the hand-held camera; but there were some spots in which I felt seasick from the camera bobbing around. The audio was not the best during the party scene. The background noise from the party was not edited out; and it was sometimes hard to hear the various conversations; but this also made the documentation of the situation more plausible and intense.The use of a relatively unknown cast helped raise the authenticity of the film.  Something to note: You will probably see something different every time you watch this movie. There are various cut-outs during the film just as you might experience on a home digital camera. Some of the film of Rob and Beth’s trip to Coney Island on April 27 is shown in little bits from time to time. Watch these cut-outs very carefully. You just might get a clue as to where the monster came from.If you’re into horror films and monsters, I highly recommend watching this movie at least once.This movie was released in 2008 and is rated PG-13.Thank you for stopping by and happy viewing.