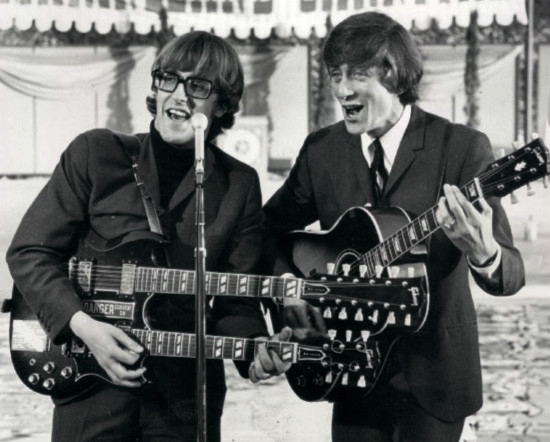 Chad Stuart and Jeremy Clyde were a folk-rock duo who came from England and became part of the British Invasion making the American rock scene in the 1960s. Surprisingly they only had one U.K. hit in 1964 “Yesterday’s Gone”. Their next single became a great hit in the U.S. “A Summer Song” rising on the Billboard Hot 100 to number seven. Other hits followed like “Willow Weep For Me” and “Before and After”.

Even though they had done well with these hit songs their two albums Of Cabbages and Kings in 1967 and The Ark in 1968 did not sell well. Chad and Jeremy tried TV appearances. On The Dick Van Dyke Show in 1965 they played a duo known as The Redcoats and played two songs “No Other Baby” and “My, How the Time Goes By”. Next up they were on The Patty Duke Show playing a duo calling themselves Nigel and Patrick and sang “A Summer Song”, “The Truth Often Hurts”, and “Yesterday’s Gone”. They made an appearance just being themselves on the hit 1960s show Batman and sang “Distant Shores” and “Teenage Failure”.

Jeremy Clyde went on The Dating Game being picked as the favorite bachelor and Chad Stuart did the voice of Flaps the vulture in the Disney movie “The Jungle Book” in 1967. In 1968 they did the music for the movie “Three in the Attic”. They came together for a reunion in 1983 recording the album Chad Stuart and Jeremy Clyde. From 1984 – 1985 they starred in the West End production of Pump Boys and Dinettes in England and returned to the U.S. in 1986 along with other British Invasion artists for a nostalgia tour. On their own, they performed at Harrah’s Casino in Lake Tahoe and the Reno Hilton in the U.S. in 1987 and once again went their separate ways.

Chad and Jeremy were reunited through PBS in 2003 performing in the 60s Pop-Rock Reunion special and went on tour the following year and the duo have now been touring ever since. In 2008 they came out with Ark-eology and album which featured their songs from the 1960s and in September 2010 they released a limited-edition CD Fifty Years On. In January of 2009, they performed at the Sundance Film Festival in Park City, Utah.