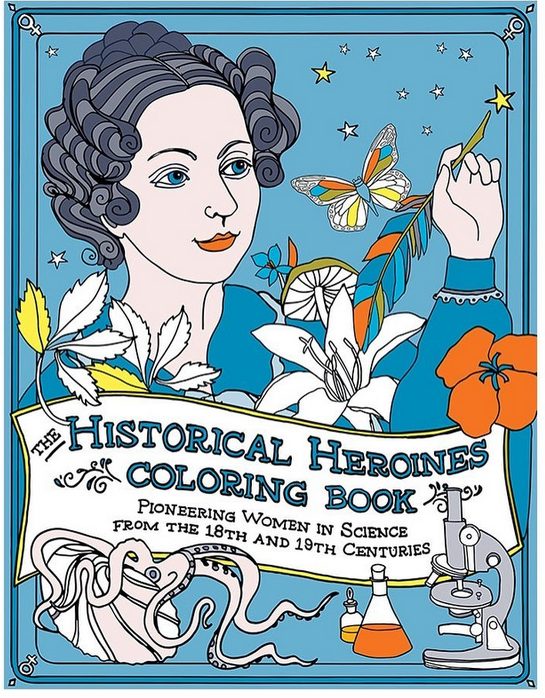 The Historical Heroines Coloring Book: Pioneering Women in Science from the 18th and 19th Centuries (White Wave Press; ISBN: 978-0-9979098-9-0) offers intriguing insights into women scientists from across the centuries, having an international scope that is truly amazing in a work that bills itself as a mere coloring book. Although each of the thirty scientists featured has a full-page portrait of the woman herself to color in, the extent of work that has gone into writing and illustrating the work shows that it is a true labor of love (as behooves any work that ardently supports the feminist cause, even in the most subtle of ways). The highly qualified and world-famous women who people these pages in the most interesting of ways range from the 18th-century Chinese mathematician and astronomer, Wang Zhenyi, to the 20th-century Danish geologist, Inge Lehmann (making this work of an even greater span that the title so unassumingly leads us to believe).

Much thought has gone into The Historical Heroines Coloring Book, as is evidenced by the extensive glossary, which clearly explains the meaning of such advanced concepts as ‘Congressional resolution’ and ‘Difference Engine’ in such an accessible way that all English-speaking children should easily be able to understand the meaning and importance of the ideas embodied here. Essentially, this work is a teacher’s and parent’s dream, as it is ideal for both educative and enjoyment purposes. Not only are the published sources of information listed in such a way as to encourage further reading on each of the scientists involved, but also the website addresses of a range of related bodies and institutions are given that invite further exploration. Acknowledging the limitations of this work to only thirty of the key female scientists who lived during the period of time covered by The Historical Heroines Coloring Book, the names and fields of endeavor of other like-minded women are also provided, so that those whose interest has been aroused by the outstanding achievements of the female subjects of the work can use this work as a springboard to an abiding interest in woman-generated scientific discovery.

It comes as absolutely no surprise that the author of The Historical Heroines Coloring Book is an award-winning author and publisher of children’s books, including, most notably, The Adventures of Piratess Tilly, as well as being a mother and artist. Her sensitive portrayal of how the professional and dedicated heroines overcame numerous challenges, both in their careers and on the home front, bears witness to the above. In conveying information about these pioneers of scientific endeavor, Lorayne’s well-worded and highly accessible text is soundly supported by the simple line drawings of the BFA graduate Kendra Shedenhelm, who artfully captures the essence of the women involved.

An inspiring work that sets out to do far more than just be a mere coloring book, although its popularity is most likely to be enhanced by such a format, The Historical Heroines Coloring Book: Pioneering Women in Science from the 18th and 19th Centuries should be an ideal gift for the holiday season. It could well serve as a suitable and non-intimidating reader for English as a Foreign Language tuition, too.