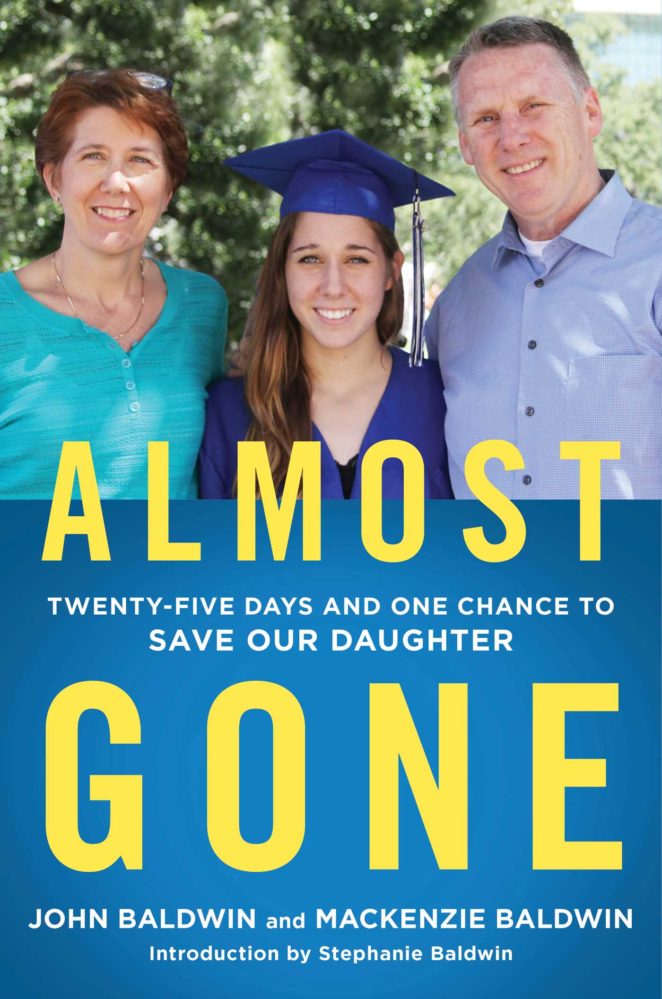 Twenty-Five Days and One Chance to Save Our Daughter

I am reviewing a copy of Almost Gone through Howard Books and Netgalley:

The Baldwin family came within days of loosing there seventeen year old daughter Mackenzie forever.  A very strong mind, and intelligent young lady she was nevertheless seduced by a man half a world away in Kosovo.  Thankfully her parents caught wind of what was happening so she did not leave on that June day in 2014.  The FBI was in her living room one day so instead of headed to the airport she was headed back to her parents house.

A year before that day in the living room Mackenzie asked her Dad John if it was okay if she brought a Koran.  A question that took him aback explaining that she wanted to compare it to the Bible.  Reluctantly her Father agreed seeing it as an opportunity to understand her Faith better.

Despite the fact that her parents warned her about the danger of chat rooms, and monitored her social media accounts, one day Mackenzie and her friend decided to try a site called Omegle out, this was where she would meet Aadam, soon they would connect on Facebook as well.  Mackenzie believing he was from New York. She would later learn that was a lie he was infact from Kosovo!  They would soon begin video chatting through Skype as well.

By August of 2013 the start of her senior year Mackenzie was no longer hanging out with her old friends.  And her discussions with her Father began shifting towards the Islamic point of view. Ultimately she outright rejected Christianity.  Both her Mother Stephanie and her Father John tried to talk to her but to no avail.  She just pulled farther and farther away from her family.

The more she talked to Aadam, the farther she withdrew from the people she loved.  Before long she was committed to worshipping at a Mosque despite the fact that she felt uncomfortable.  It made Aadam Happy so she did it.

It was a family friend named Scot who made John aware that Mackenzie was planning to go to Kosovo to marry Aadam. The FBI learns about her fraudulently get another passport, and warns her of the dangers that she could have met.

It was not that John and Stephanie feared their daughter would become Muslim, they feared worse that she could be trafficked even killed.

Thankfully Mackenzie Baldwin did not make that trip, and completely cut off ties with Aadam , she is a college student with a double major now, Psycholgy and Child Development And works at Petsmart.

Five out of five stars.