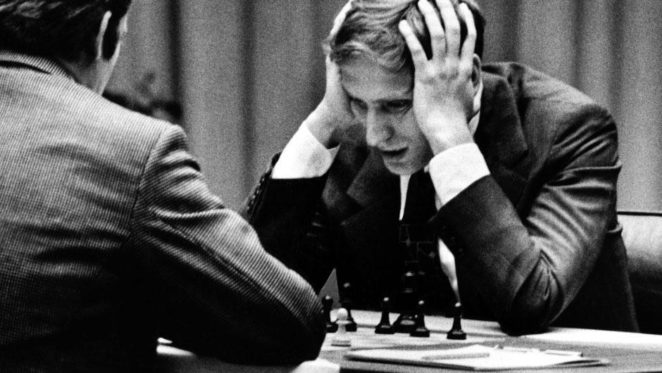 Chess finds a person out. If you have an intellectual ego and lose a game of chess to someone you feel superior to it’s quite a blow to that ego. No one who thinks they are smart wants to lose to someone who they think is not so smart. That’s why I try not to play any chess anymore. For the very best, the Grandmasters, just think how devastating it is for them to lose? And if you are at the very top like Bobby Fischer was it can mangle your brain staying top dog. It did mangle his brain. He was Jewish and went so nuts he ended up denying the Holocaust in several interviews. On a radio show shortly after the 9/11 attacks, he proclaimed them “a wonderfulness”.

This documentary is about his life – obviously- and centres on the infamous World Chess Championship match in Iceland against the Russian Boris Spasky. It happened at the height of the Cold War and was a huge story back in the 1970s, well worthy of the documentaries that followed. This film (2007) is deemed as the best on it.

After some cute black and white photos of his childhood and the back-story on his parents we pick up the story when the then 13-year-old Fischer defeated the then 26-year-old Donald Byrne, America’s National Chess champion, who Bobby would then go on to win the US championship from as a 14-year-old on the cusp of his 15th birthday in 1958, shocking the world chess scene, giving him the title of International Master. Later that same year he broke future opponent Boris Spassky’s record to become the youngest World Chess Federation Grand Master at 15. Boris was 18 when he set the distinction. Clearly these two were heading to a brain melting showdown at some point. The two would become linked forever in chess history when they did meet. When they first played each other in 1960, Fischer lost during an Argentine tournament, though the two tied and were co-winners of the tournament.

Fischer was a cocky Brooklyn Jew and quickly became a media darling but no less awkward in that world, obsessed with chess and little else. He had a likewise pushy mother and an absent father and arrogantly dismissed champion after champion, until that big showdown in Iceland. This was the match with the guy that could beat him and no surprise he was reticent to risk that loss. Russia had dominated the chess scene and the Cold War had kept the two sides apart but a deal was struck and it was East v West for huge money. The match was top of the news every night and nothing quite like that has happened since. There had never been an American world champion. Fischer was a cerebral rock star.

‘He was the perfect American hero for the time. His reputation for being difficult only added to the aura.” — Norma Mailer

The match itself was fascinating with brilliant footage from the time detailing the first to 21 point contest, one point for a win, half point for a draw. Fisher refused to show for the first match in front of the words live TV and so Spasky 1-0 up by default, Fischer brooding in his dressing room as the tension rose in Iceland. Match two he finally showed after Spasky had played his opening gambit only to see Fischer lose the match with a dumb and unexpected move that shocked everyone involved, including Fischer. He then got stroppy later during the first week and demanded changes to the playing conditions, like moving the match arena away from the cameras and into a sealed room to stop the cameras seeing him. It was still televised but they were alone in there. The mind Games played around chess are quite extraordinary as they try and unsettle the opponent.

I enjoyed this although only to a point as half-way through I realized I had seen it before. If you haven’t seen it and you don’t know the story then it’s quite a movie. Fisher is a fascinating character and it is amazing just how many of our great thinkers, bankers, politicians are Jewish. But that’s a whole other argument we won’t get into.

Arrogance is often a trait of the super intelligent and Fischer has spades in the movie. These people tend not to suffer fools easy and in his case most people are obviously fools to him. Chess is clearly invented for mental warfare between players and nations and the best at it must cerebral intense beyond our calculation.