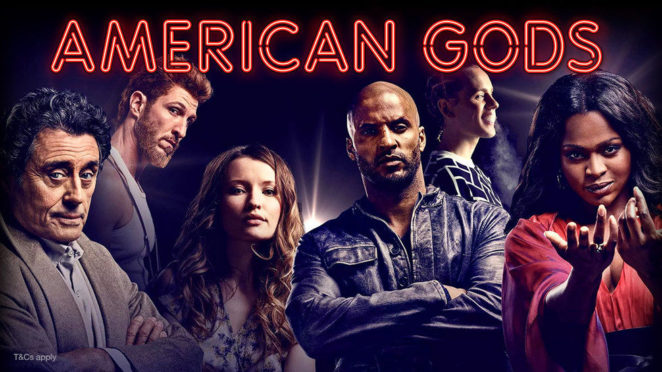 American Gods is an American fantasy drama television based on the book of Neil Gaiman with the same name. Neil Gaiman is an American author who is also famous for his novel works like Coraline and Stardust which were made into films. American Gods is originally published as a novel in 2001. Bryan Fuller and Michael Green developed the series for the premium cable network Starz, as well as showrunners for its first season, yet to be replaced by Jesse Alexander for season 2. Gaiman also serves as the executive producer along with Green, Fuller, Craig Cegielski, Stefanie Berk, Adam Kane, and David Slade.

The series depicts the story of Shadow Moon, who upon after being released from incarceration meets up a mysterious old man named Mr. Wednesday. Soon he becomes involved in a large-scale conflict between the Old Gods and the New Gods, who get stronger each day. Starz network and streaming service ran the first season initially from April to June 2017. Season 2 was then renewed in May 2017.

The series was cast by award-winning English actor Ricky Whittle (Calvin Valentine of Hollyoaks/ Captain East of Austenland/ Lincoln of The 100/ Daniel Zamora of Mistresses/ Charles of Single Ladies/ Ryan Naysmith of Dream Team) as Shadow Moon, an ex-convict who after being released from prison becomes Mr. Wednesday’s travelling bodyguard. Five-time award-winning Australian actress Emily Browning (Violet of A Series of Unfortunate Events/ Babydoll of Sucker Punch/ Eve of God Help the Girl/ Cassia of Pompeii/ Wanda of The Host/ Lucy of Sleeping Beauty/ Anna of The Uninvited/ Katie Harwood of Ghost Ship/ Clio of Thunderstone/ Phoebe of High Flyers) as Laura Moon, wife of Shadow who became a revenant, or a visible animated corpse that is believed to have revived from death. She also portrays Essie MacGowan, the Irish woman who has great belief in leprechauns that changes the course of her life. 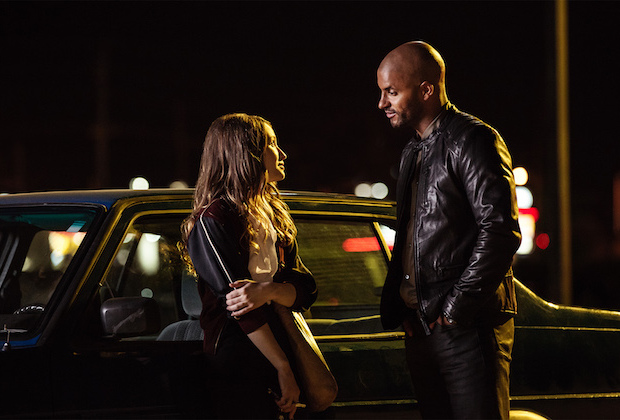 Three time award-winning American actor Crispin Glover (George McFly of Back to the Future/ Stayne or Knave of Hearts of Alice in Wonderland/ Willard of Willard/ Mosley Baker of Texas Rising/ Grendel of Beowulf/ Simon and Stanley of Simon Says/ Thin Man of Charlie’s Angels: Full Throttle/ Howdy of Twister/ Jimmy Mortimer of Friday the 13th: Last Chapter) as the New God of globalization and the leader of the New Gods also known as Mr. World. 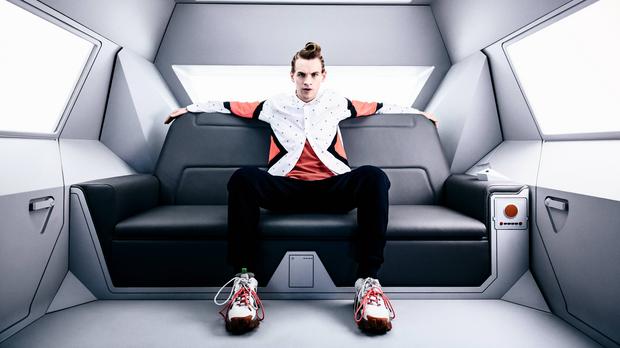 Nigerian-born American actress Yetide Badaki (Anita of Cardinal X/ Keira of Sequestered/ Annie of The Prayer Circle/ Naomi of Expiration/ Tunisian Desk Clerk of Lost) played the role of Bilquis, the Queen of Sheba, who is also the Old Goddess of love, who devours any men who she engages during sex. Primetime Emmy nominee and 3-time award-winning Canadian actor Pablo Schreiber (Kris “Tanto” Paronto of 13 Hours/ George “Pornstache” Mendez of Orange is the New Black/ Bloom of Beast of Burden/ Ray Merrimen of Den of Thieves/ Zeke Tilson of The Brink/ William Lewis & Dan Kozlowski of Law & Order: Special Victims Unit/ Virgil of Ironside/ Demetri Ravitch of Weeds/ Johnny Leary of Lights Out/ Tal Feigenbaum of Numb3rs) played his role as Mad Sweeney, a leprechaun in the employ of Mr. Wednesday who had troubles coming to terms with his lost charm. In Irish folklore, a leprechaun is a type of fairy of the Aos Sí, or a supernatural race in Irish and Scottish mythology. They are usually depicted as little bearded men that wear a coat and hat partaking in mischief. They are solitary creatures who spend their time making and mending shoes and are said to have a hidden pot of gold at the end of the rainbow. 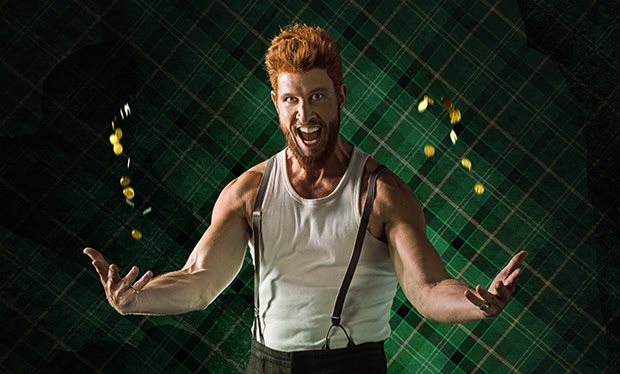 Golden Globe winner and 3-time award-winning English actor Ian McShane (Al Swearengen of Deadwood/ Blackbeard of Pirates of the Caribbean: On Stranger Tides/ Tai Lung of Kung Fu Panda/ Mr. Sergei Alexander Bobinsky of Coraline/ Narrator of The Sorcerer’s Apprentice/ Waleran Bigod of The Pillars of the Earth/ Beith of Snow White and the Huntsman/ King Brahmwell of Jack the Giant Slayer/ Winston of John Wick/ Amphiaraus of Hercules/ Andrew Finney of Ray Donovan/ Brother Ray of Game of Thrones) played the role of Mr. Wednesday, a con artist and the Old God Odin. 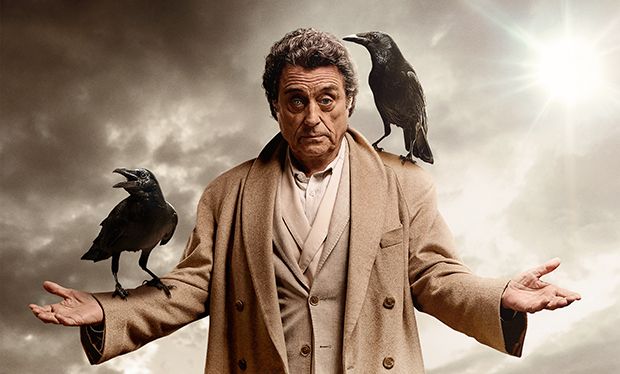 This series is between a comparison of Old Gods and the New Gods. Fuller also stated that he wanted the Old Gods to be portrayed as gritty and rustic to “demonstrate the well-worn aspects of their religion and the consequences of going without faith for so long”, whilst the New Gods are portrayed as slick and updated with their technology to illuminate “how valuable and pertinent they are, in their own religions.”

The first season of American Gods has also received largely positive reviews from critics. On website aggregator Rotten Tomatoes, it has a 94% rating with an average score of 8.13 out of 10 based on 71 reviews with the consensus that states:

“American Gods opens with a series of wildly ambitious gambits – and rewards viewers’ faith with a promising first season whose visual riches are matched by its narrative impact.”

While on Metacritic, it has a score of 77/100 based on 36 reviews that indicates “generally favorable reviews”. IMdb (Internet Movie Database), the world’s most popular and authoritative source for movie, TV and celebrity content, has given 8.1 out of 10 for this series’ rating. New York Magazine’s writer Matt Zoller Seitz described the series as “bizarre, dazzling show”.

In my own personal thoughts and review, American Gods is a purely “for adults” series. It has strong and mature content not suitable for young audiences. There were also sexual scenes, violence, and gore that recommend strong parental guidance. Though this series portrays different gods from a variety of world religions, from old mythology and even to widely-acclaimed religions from across the globe nowadays, yet this one still wants to convey its viewers that mankind has their own way of worshipping their gods when it comes to their belief, conviction, and faith. It’s been a human nature that believing in a supernatural being, praying them, offering and hoping for the best to come through their omnipresence, is one way of practicing faith and reliance from day to day living that were practiced centuries ago.

So if you like a series about gods where you want to acquaint different theological concepts from all sorts of religion and faith practice from around the world, including the ancient and mythological ones, just give it a try watching this one. I give 8/10 for this series. Worth to watch but never for kids!