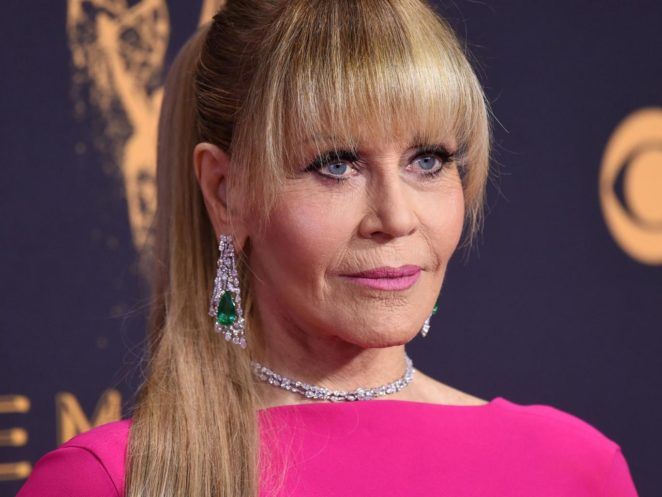 Over the last few days, the internet has been in an uproar (what else is new?) over a couple of beautiful, older women who are daring to show that they are…..beautiful, older women! Both are actresses, both are mothers, though each is at very different stages of her life. Jane Fonda needs no introduction as she has been a celebrity nearly her entire life. Perhaps less famous is Jenna Dewan Tatum, a dancer and actress who is probably best known as the wife of hunky actor Channing Tatum.

The 79 year-old Fonda’s appeared at the Emmy Awards in Los Angeles on Sunday wearing a hot pink gown designed by Brandon Maxwell that showed off her enviously lithe figure. Looking much closer to 50 than 80, what was perhaps most striking about her change in appearance was her hair. Gone was her trademark shoulder length bob. In its place were dramatically straight (and youthful!) bangs and a…..gasp…. ponytail!

Jane’s face also garnered some attention as her cheekbones looked noticeably more prominent than of late. Jane was joined onstage by Dolly Parton and Lily Tomlin, her costars from the audience favorite 1980’s comedy “Nine To Five”.  Both Dolly and Lily looked quite fetching for their age  (71 and 78 respectively).

But neither drew the amount of attention and criticism as Jane for having the audacity to show that women well past the age of 60 could still turn a man’s head! Though Jane herself might confess to a minor nip or tuck (the smart celebrities will always ‘fess up to an eyelift), it was indisputable that her figure was the result of far more time spent doing pilates and aerobics (she was a trailblazer in the 1980s after all) than sitting on the front porch doing needlepoint in a rocker like a good octogenarian.

Also drawing a firestorm of criticism, is Jenna Dewan Tatum. The 36 year-old wife of “22 Jump Street” star Channing Tatum.  Dewan Tatum was “Mommy Shamed” on the internet for showing off her toned buttocks in a sexy, lingerie clad outift  posted on Instagram. Some posted that she was being a bad role model to their 4 year-old daughter, Everly.  Even those speaking in her defense seemed conflicted. Several posted back-handed, semi-supportive comments. “You look amazing but I don’t get why everyone wants to show their ass all the time for no apparent reason,” cried one baffled IG user, no doubt wearing a caftan as she typed.

Female celebrities have a perilous role to play as the get older. Should they flout convention a la Fonda and show that they dare to continue working out, following style and fashion trends,  and generally want to keep their hat in the fame game? Or should Dewan resign herself to motherhood, cover up her backside and keep to supporting her more famous spouse? It may be worthy of note, that no criticisms were hurled at Channing Tatum when he decided to play a flesh baring male stripper in the film “Magic Mike” a few years back. Also of note is that he has been nothing but supportive of his wife’s choice to post about her physical assets.

Shortly after the furor broke out over her photo,  Dewan smartly posted a graphic about how women should support each other instead of tearing each other down. It had a caption  which read: “To all the strong women out there. May we be them, may we know them, may we raise them. Rise above judgment and step into love.” Easier said than done Ms. Dewan. In the meantime, the lines to the stairmaster at the gym are getting longer.