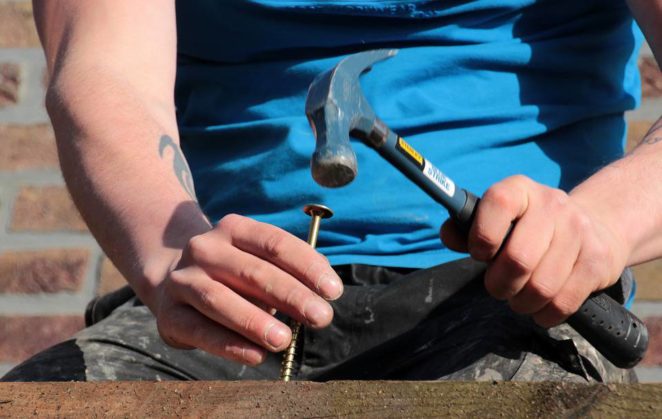 The hammer is made of a long wooden stick, attached to a block of metal. It is designed to deliver high force in a small area. The metal head can be round on both the sides or round on one side with a sharp edge on the other side. The handle is mostly made of wood, but it is also made of plastic or fibreglass sometimes.

Hammers are truly versatile tools. They can be used for a variety of applications. Primarily, a hammer is used for hitting things like driving nails, breaking objects and forging metal. The metal head should be heavy so it can do the job, but the user should be able to lift the hammer without any difficulty so it is easy to swing. In a household, hammers are generally used to drive nails into the wall for hanging pictures or to open a tin can.

Hammers come in different shapes and sizes. As the metal head of the hammer changes form, the tool can be categorized as the claw hammer, ball peen hammer, sledgehammer, and more.

The most common types of hammers are:

As the name goes, the head in a claw hammer has a pointed claw on one end and a flat end on the other. It is also called the carpenter’s hammer. The claw usually has a slight curve, and the hammer is used to drive nails in or to pull nails out from a wooden surface. It can also be used to lever up floorboards. The claw hammer is especially helpful with woodworking tasks. It is a must-have in every workshop. For other woodworking tools, visit Craft Like a Pro for comparison articles and buyers guide.

The ball peen hammer has two ends on the head, one is round and the other is flat. It is mostly used to bend and shape metal and set rivets. This is one of the essential tools to have in the metalworking industry. The head is made of high-carbon steel or alloy steel, while the handles are normally wood. The ball peen hammer is best suited to work with hard metal.

The cross peen hammer also has two ends on the head, round on one side and wedge-like on the other. It can be used for starting panel pins or tacks without the risk of hitting your fingers. It is also useful in metalworking, such as forging and riveting.

This type of hammer goes by many names – lump hammer, crack hammer, and drilling hammer. It has a double-faced head with a small handle. The hammer is most useful for light demolition work, driving steel chisels and masonry nails.

The joiner’s mallet has a large wooden head with slightly angled faces and a wooden handle. It is used to drive chisels or to tap wood joints together. This hammer is mostly used in places where a metal-faced hammer would cause damage or bruising. The wooden mallet gives better control of the chisel while driving it because the force is lesser.

This hammer has a large flat metal head joint with a large handle. It is used to drive wedges. The user must wield the hammer like an axe for doing the heavy work. It is normally used for doing heavy jobs like driving in stakes or to break up concrete, stone or masonry.

These hammers have a rubber handle and a soft nylon face. They are designed to deliver force without damaging the surface. It is used to strike things that should not be damaged. The soft-faced hammers help to bend or shape metal without deforming it.

This resembles a claw hammer, with a straight claw and waffled head. The framing hammer is named after its primary function, which is assembling house frames. The waffled head helps prevent slippage while driving nails. It can mar the surrounding wood, but it is not seen once a house is finished.

Commonly used by blacksmiths, the blocking hammer features a flat, square head on one side and cylindrical head on the other. This can be used for shaping metal on a block or anvil.

The claw of a brick hammer doubles as a chisel for scoring, while the narrow head is capable of splitting bricks. This makes the hammer very useful in bricklaying and masonry projects. It is also called the masonry hammer sometimes.