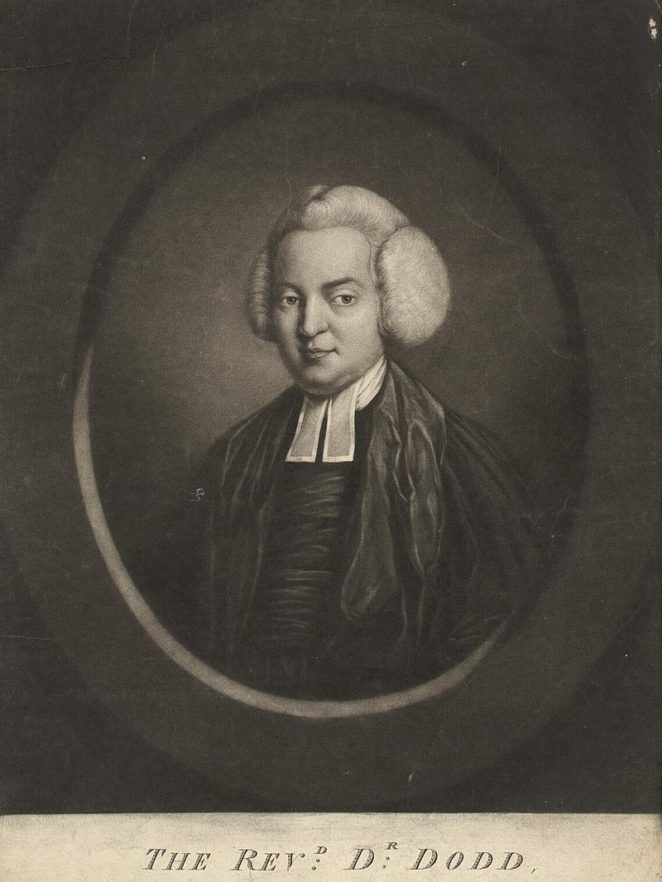 There were two sides to the character of the Reverend Dr William Dodd. Born in 1729 he became an Anglican clergyman, a scholar, a Cambridge academic and an excellent preacher. He was active in a number of charities, some of which he instigated, such as the Society for the Relief of Poor Debtors and the Humane Society for the Recovery of Persons Drowned at Sea. He was at one time a royal chaplain to King George III.

However, he also had a taste for the high life and for living beyond his means. It was this side of him that would eventually lead to his downfall.

One of his ventures forced him to flee to Switzerland, where he stayed with his friend and former pupil Philip Stanhope, Lord Chesterfield. On returning to England he lost large sums of money in gambling and had no choice but to borrow heavily.

In February 1777 he got the notion that he could relieve himself of debt by committing a fraud that involved Lord Chesterfield. He forged a bond for £4,200 – an absolutely massive sum at that time – in Chesterfield’s name. He pretended to be Chesterfield’s agent in raising a loan, the money to be forwarded via himself. However this was never going to work, because the forged bond was always going to be sent to Chesterfield on completion, and when this happened it was immediately disowned because Chesterfield recognized the handwriting of his old tutor.

Dodd’s defence was that the bond was only going to be temporary arrangement and he always intended to repay it, but this did not convince the jury at his trial for forgery at the Old Bailey. The guilty verdict came back after only ten minutes.

During the 18th century there were 350 offences on the statute book that carried the death penalty, and forgery was quite high on the list. This was therefore to be Dr Dodd’s fate.

This now proved to be a “cause celebre”, with much public sympathy being aroused for Dr Dodd. It was generally thought to set a bad example for such a respected clergyman to be hanged in public. His most eminent supporter was Dr Samuel Johnson, who wrote a number of speeches for Dr Dodd to use in his appeal for a royal pardon.

However, the appeal came to naught and Dr William Dodd was duly hanged at Tyburn on 27th June 1777. There was a considerable outcry after the event, with calls being made for a lessening in the severity of the penal code, but this probably had much to do with the fact that the protesters came from the same high social class as the late Dr Dodd.

A 15-year-old orphan named John Harris was hanged on the same day as Dr Dodd, his offence being the theft of two and a half guineas. There was no outpouring of concern for his fate, least of all from Dr Johnson.