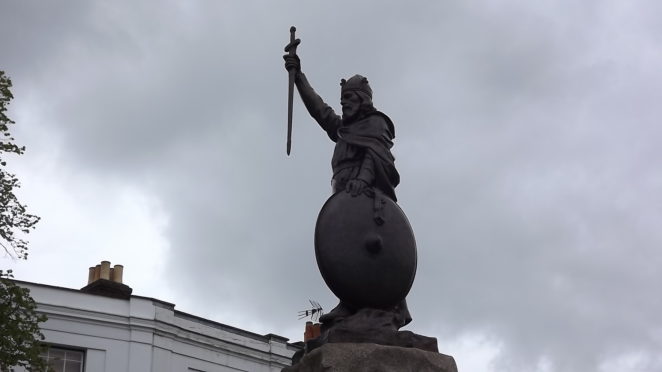 Every schoolchild knows the story about how King Alfred burned the cakes he was supposed to be minding and got a severe telling off from a peasant woman who did not know who he was. At least, every British schoolchild used to know this, as it was one of the stories that was ingrained in the British psyche almost from birth, along with King Harold getting an arrow in the eye at the Battle of Hastings and Nelson being kissed by Hardy.

However, as with many “everyone knows” stories, there is every possibility that the truth has been greatly enhanced over the centuries and the actual facts might not be as related.

What cannot be doubted is that England during the late 9th century was a very dangerous place for English leaders in the face of constant raids by Danish invaders. Not only did they appear on the coasts of England every year to take whatever they wanted and destroy what they did not, but they had started to settle in northern and eastern England and established a colony of their own (known to history as the Danelaw). By the year 878 all the English kingdoms, with one exception, had fallen to Danish armies.

The exception was Wessex, the land of the West Saxons in south and west England. However, their king, Alfred, was on the run and under severe pressure. He had been forced, together with a small band of followers, to seek refuge in the area known today as the Somerset Levels, which in those days was a land of bogs and marshes with the occasional piece of higher land protruding as an island.

The cakes story is that Alfred had sought refuge in the home of a peasant woman who set him the task of looking after the baking bread (the loaves became cakes in later retelling) while she got on with other things. However, Alfred was so wrapped up in his worries about how he was to defeat the Danes that he forgot the loaves and they were duly burned. When she gave the king a piece of her mind he could only apologise and be more attentive with the next batch.

The problem with the story is that it only appeared in writing more than a century after it apparently took place, and must be regarded as an illustration of Alfred’s character rather than an actual event. After all, only two people would have known about it at the time – the peasant woman would have had no idea of its significance, as she did not know who her guest was – and Alfred who, had he told the story himself, would have guaranteed that it was written down immediately rather than be handed down by word of mouth for another hundred years.

At all events, Alfred’s retreat to Somerset did seem to give him fresh resolve. In May 878 he led an army that defeated the Danish King Guthrum and forced him to withdraw to the Danelaw.

Alfred then reorganised his kingdom in order to make it less susceptible to future Danish incursions. He established fortified towns known as “burhs” that became “boroughs” in later centuries. He also encouraged the building of a fleet of boats that were similar to the Danish longships, thus laying the foundation of the Royal Navy, and organised his army so that, at any one time, half the men were on active service while the other half were at home on their farms. He also encouraged the growth of education because he hated the thought that his people were wallowing in ignorance.

It is not for nothing that King Alfred has always been known as Alfred the Great, the only British monarch to the given this honour.