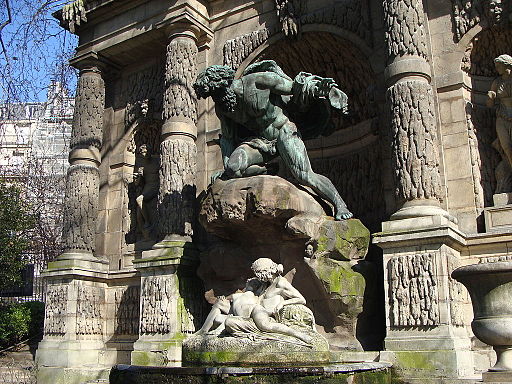 We know about Greek myths, but we also know that some Roman poets composed myths based on Greek ones but with the addition of extra details. The poet Ovid, who was active during the reign of Emperor Augustus, was known to have done this, notably in his famous work “Metamorphoses”.

The story of Acis and Galatea is known to us thanks to Ovid, but his source was almost certainly a poem by Theocritus, who lived in Sicily (a Greek colony) in the early 3rd century BC. Perhaps we can therefore call it a “Graeco-Roman” myth.

This is a love triangle tale in which violence is the outcome when two men love the same woman.

Galatea is a sea nymph in love with a young shepherd named Acis, but she is also fancied by a one-eyed giant named Polyphemus who is a son of the sea-god Poseidon. If the name sounds familiar it is because Odysseus encounters a cyclops named Polyphemus during his travels in Homer’s Odyssey. However, the two stories are very different with only the name being the same.

In the story of Acis and Galatea, Polyphemus does everything he can think of to supplant Acis in Galatea’s affections, including smart dressing and personal coiffure. Had certain “fragrances for men” been available at the time he would almost certainly have spent a fortune on them! However, a young shepherd with both eyes in place was always going to have a huge advantage over an incredible hulk with one eye missing.

Polyphemus turns to music as the answer. He makes a set of “pan pipes” with a hundred reeds that can be heard for miles around when he blows it. He composes a love song which he belts out at full volume.

As Acis and Galatea lie in each other’s arms on the sea shore, hearing the giant’s song, they find all this highly amusing. How could Polyphemus possibly hope to win the love of a beautiful nymph? They laugh out loud at his presumption.

Suddenly the song stops and the amorous couple find that Polyphemus is standing over them, roaring with anger at being mocked in this way.

Galatea slips into the sea but Acis is not so lucky. Polyphemus grabs hold of the side of a nearby hill and throws most of it at the shepherd, crushing him to death.

Distraught Galatea is unable to restore her lover to life, but she has enough magic in her to change his blood into water that then flows as a river from underneath the rocks thrown down by the giant. Acis is now a river god who can always be in contact with Galatea at the point where the river meets the sea.

Origins of the myth

One possible origin of the myth is a river that flows underground on the eastern side of Mount Etna and emerges into the open shortly before reaching the sea. This river is still known as the River Akis.

The story might also have been a political satire aimed at a ruler who had a mistress named Galatea.

Another variant of the myth has Polyphemus winning the hand of Galatea in a sort of “Beauty and the Beast” scenario. Her three sons become the founders of the Gauls, the Celts and the Illyrians.

The myth inspired a large number of artistic and musical works in later centuries, with one of the best known being Handel’s celebrated opera “Acis and Galatea” which reached its final form in 1732.