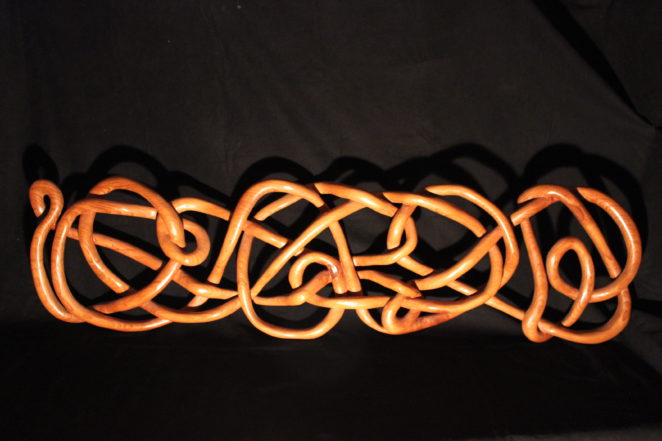 There is a juried exhibit that comes around the Fraser Valley of British Columbia every two years. It is called the “Fraser Valley Biennale”.

I managed to get my carving “Removing Angry Thoughts” accepted the couple years prior and I really wanted to repeat the next time around. The artist call for submissions came out and they had a deadline of two weeks. The only problem was I hadn’t had a chance to create something that wasn’t a commission of some sort or a piece that wasn’t a special carving for some milestone. I lacked a purely original non specific piece. One of the rules was that the submitted pieces you entered had to have been done within the last 2 years and nothing older so I couldn’t simply submit an older piece (with good conscience that is).

In a last ditch effort I grabbed a huge, solid piece of Red cedar I had hanging around and stared anxiously at it hoping some grand idea would jump out at me. It didn’t!

So out of desperation and pressure I simply scribbled a line on the big surface and proceeded to carve a 3 dimensional version of said scribble. The beginning and end of the line met to create one unending path and I started to carve. To give it more depth I had the lines go under and on top of each other.

After about a week and a half of carving, with what seemed forever, I had finished my newest piece and took some photos, ready to submit. With this being one of my more challenging pieces to date I was lucky enough to once again be accepted into the exhibit. Yay!!

When looking at it I dare you to not try and follow the line to see where it goes and if it indeed does create an unending loop. Hence the title “Follow Me”