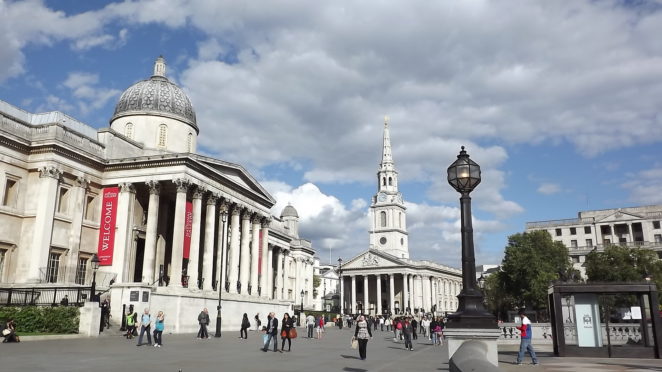 London’s National Gallery, which occupies one side of Trafalgar Square, is one of the world’s greatest collections of Western European paintings, containing around 2,300 exhibits dating from the 13th to the 19th centuries. For any art lover visiting London, it is a “must see” destination. Here are brief descriptions of just a few of the many treasures on display. 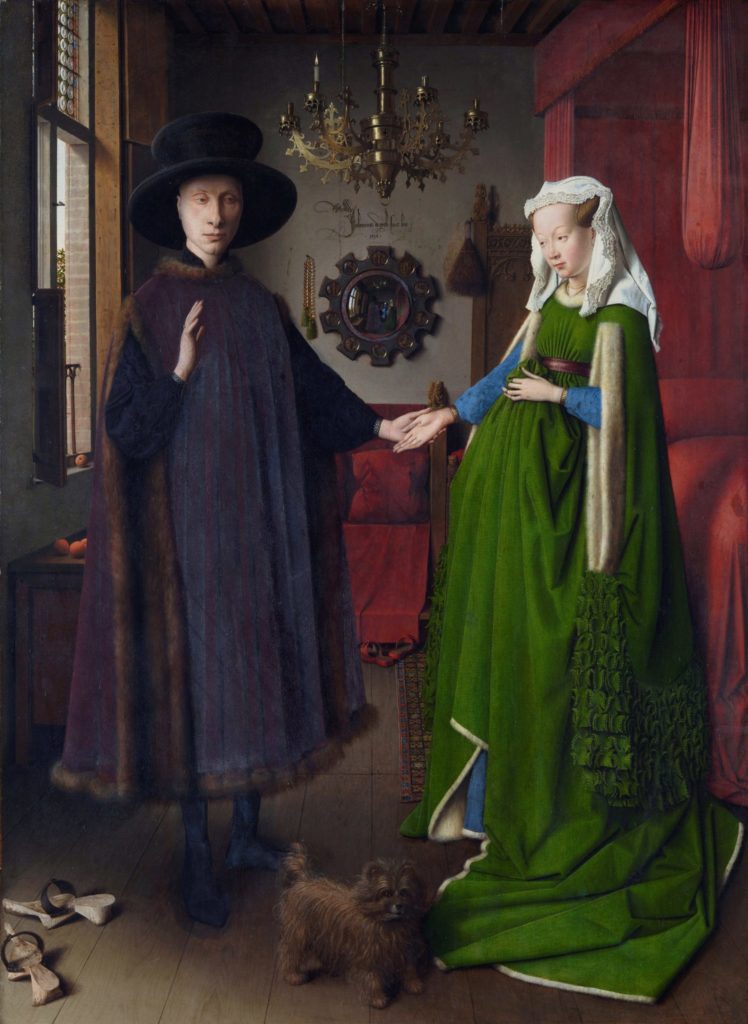 This was formerly thought to be a marriage portrait of a rich Dutch merchant and his heavily pregnant wife, but that view has now fallen from favour. For one thing, the woman is not pregnant but is holding her dress in the style of the time.

There is a lot of detail in this early 15th century oil painting (it dates from 1434), in which the artist was experimenting with the medium and demonstrating how it could be used to portray subtle variations of light and shade. In particular there is a mirror in the background in which the artist can be seen, and he signs the painting in a typically witty way in the form of graffiti on the wall that translates as: “Jan Van Eyck was here 1434”. 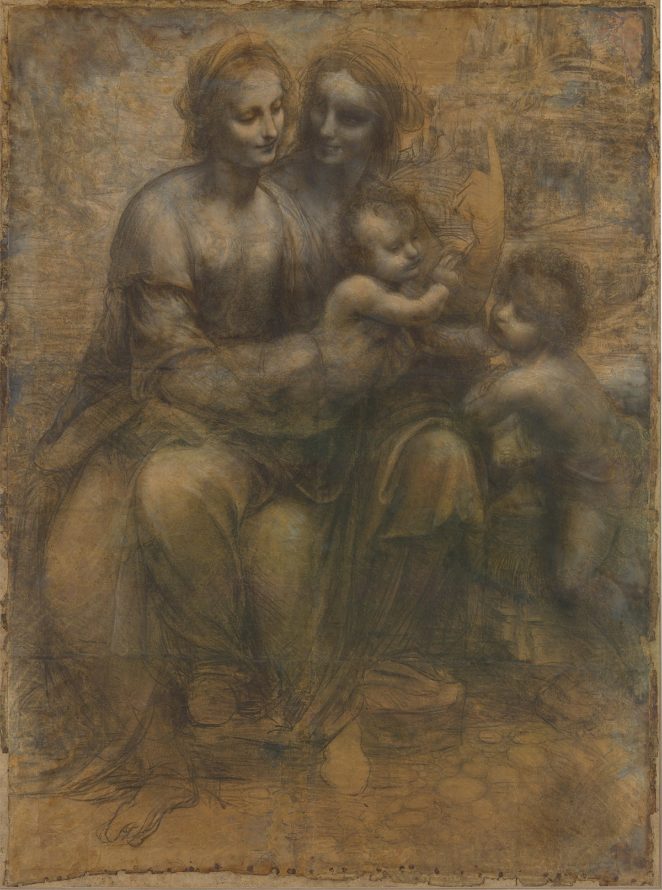 A cartoon was a full-scale drawing on paper that was intended to be a template for a painting, with the outline being pricked through to create an outline on the panel. However, this cartoon, which dates from about 1500, appears not to have been used for this purpose as it is intact, and also incomplete. The drawing was made using charcoal and chalk and measures 56 inches (141 cm) by 41inches (105 cm).

The cartoon depicts four characters, namely the Virgin Mary, her mother St Anne, and Jesus and John the Baptist as infants. Mary sits on her mother’s lap, which was a common way of portraying them in medieval art, but still adds an intimate touch to a family group that is both symbolic and naturalistic. There are no halos here, but exquisitely beautiful drawings of real people.

Hans Holbein the Younger: The Ambassadors 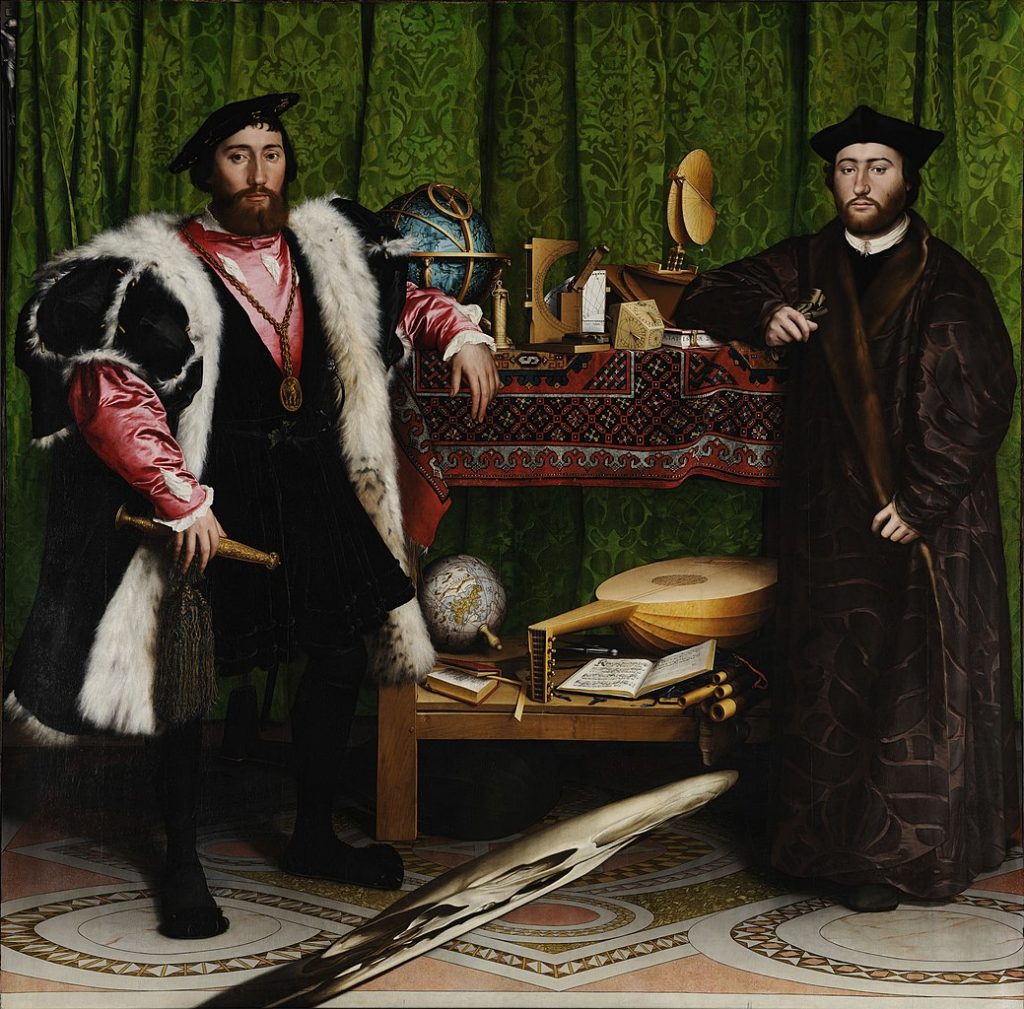 Holbein was a German who spent much of his working life as court painter to King Henry VIII. In 1533 he painted this extraordinarily detailed double portrait of Jean de Dinteville and Georges de Selve, who were on a diplomatic mission from France. The painting also includes a large number of objects and details that are full of symbolism, not all of it being sympathetic to the people being painted.

One very good reason for seeing this painting “in situ” is that there is a very strange object painted across the floor in the foreground. By standing at the correct angle to the canvas the visitor can see that this is a skull, painted as a “memento mori” to say that even the rich and powerful must meet their end eventually.

“The Ambassadors” is a very impressive work, being almost square at about 82 inches (208 cm) each way, such that the portraits are virtually lifesize. 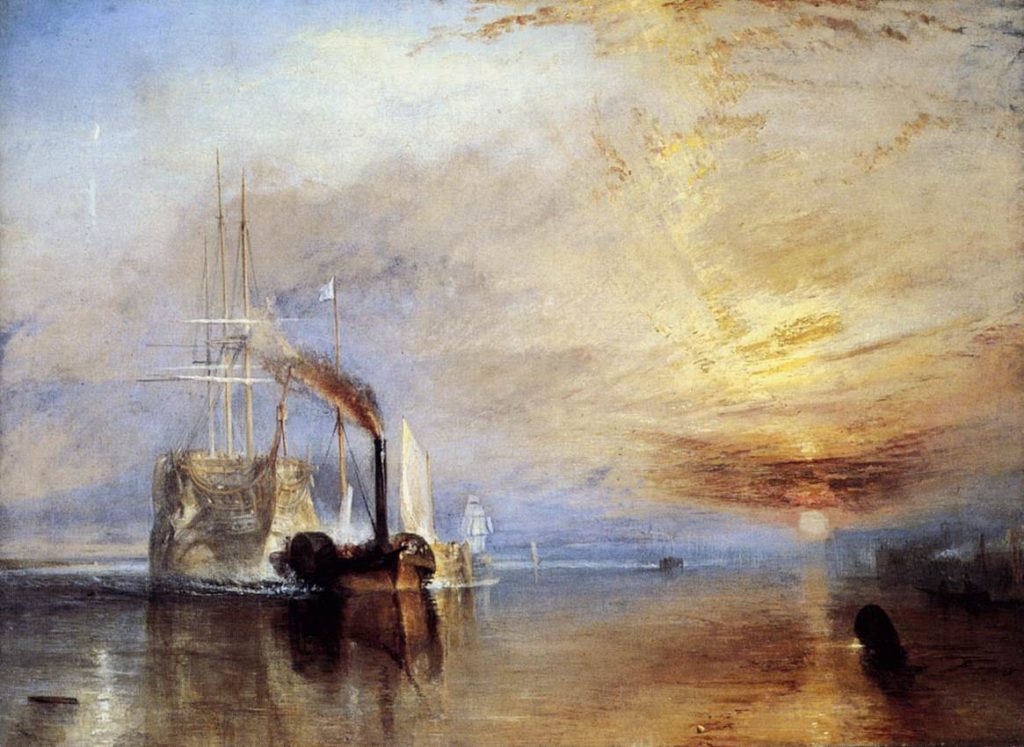 The room that houses this painting contains seven Turners, five Constables, four Gainsboroughs, and more. If time is really short you could spend your whole Gallery visit in this one room and come away having had a cultural overdose!

Turner painted this canvas (which measures 48 inches by 36 inches (122 x 91 cm)) in 1839, having witnessed the towing up-river of one of the ships that helped win the Battle of Trafalgar in 1805. Against a flat calm sea and glorious sunset, the ghostly white ship is towed by a busy steam tugboat, belching fire and steam into the sky. It is one of the most evocative scenes ever painted, and one that the viewer can never forget. 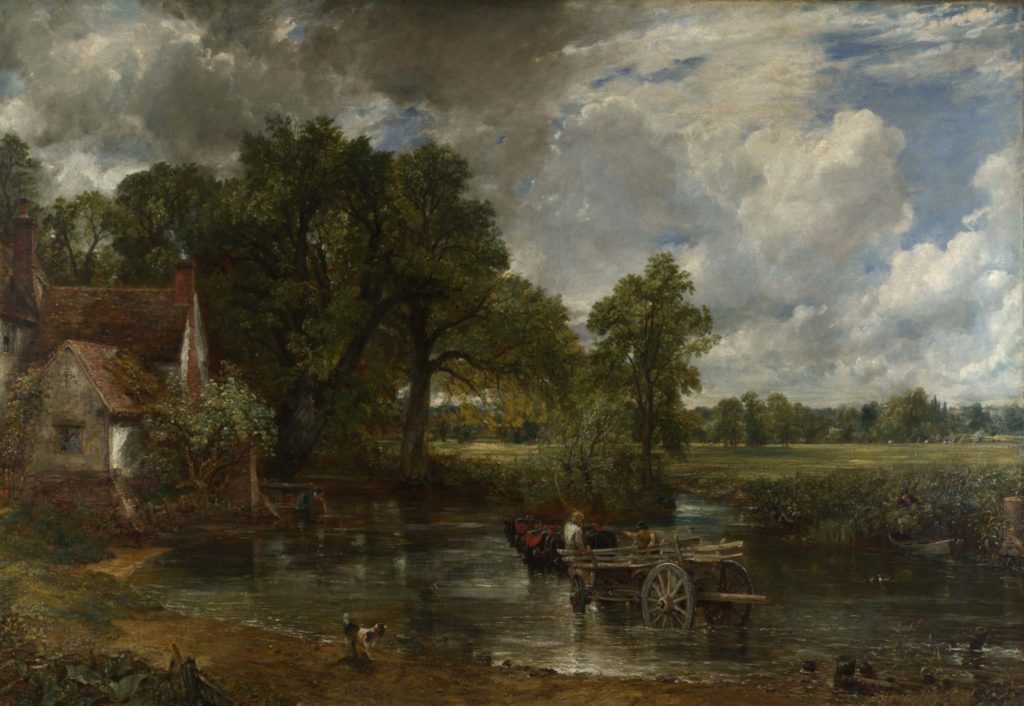 This is another painting that is instantly recognisable. The scene is of an idyllic part of England where the River Stour forms the boundary between Suffolk and Essex. A cart stands in the shallow river as the carters pause in their work of bringing in the harvest from the meadows in the distance. To one side stands a cottage that is still there today, some 190 years after Constable painted the scene in 1821.

Despite the immediacy of the scene, Constable worked from sketches to assemble the finished work in his London studio. The canvas measures 73 inches (185 cm) by 51 inches (130 cm). 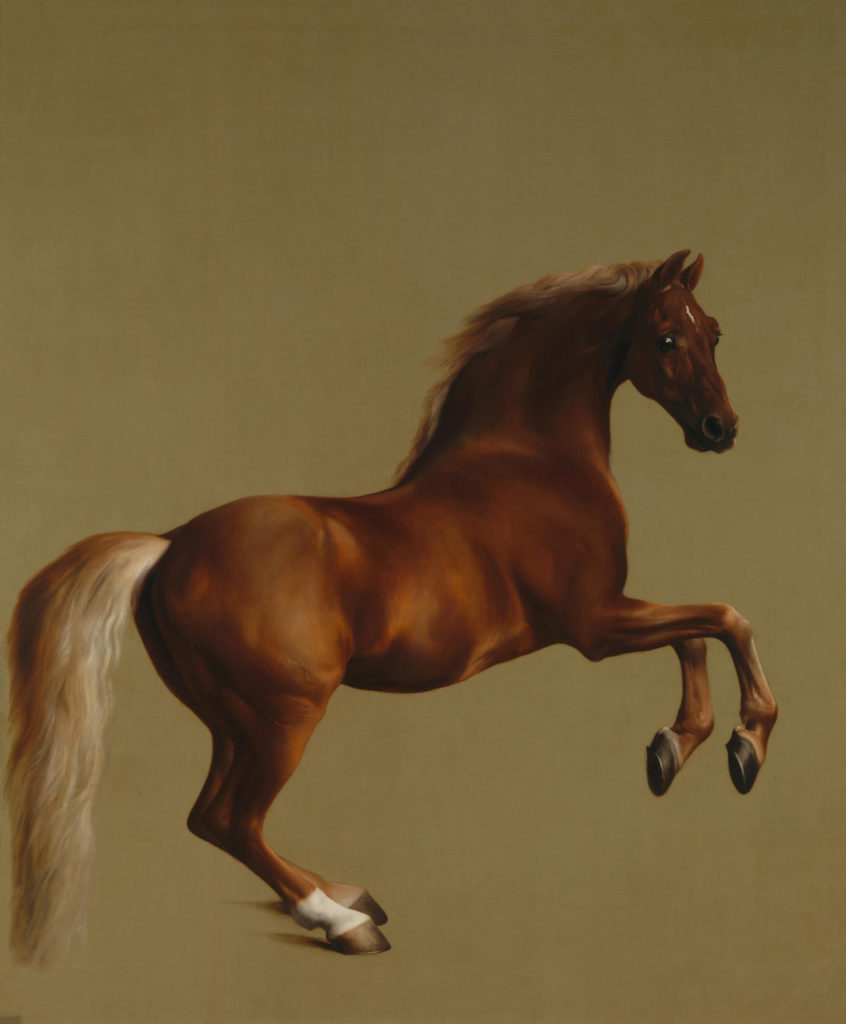 This enormous painting of a horse always draws the eye. The canvas is massive, measuring 115 inches (292 cm) by 97 inches (246 cm) and shows nothing but a chestnut horse against a plain brown background. Nobody ever painted horses better than Stubbs, and this painting (dating from 1762) is one of his best. Whistlejacket’s eye is turned towards the viewer, and one can tell that this is a horse with attitude!

Stubbs studied the anatomy of the horse in considerable detail, and his paintings reflect this. Indeed, so realistic was this painting that, when it was nearly completed, Whistlejacket (a racehorse owned by the Marquess of Rockingham) caught sight of it and tried to charge at what he thought was a real horse.

Diego Velazquez: The Toilet of Venus 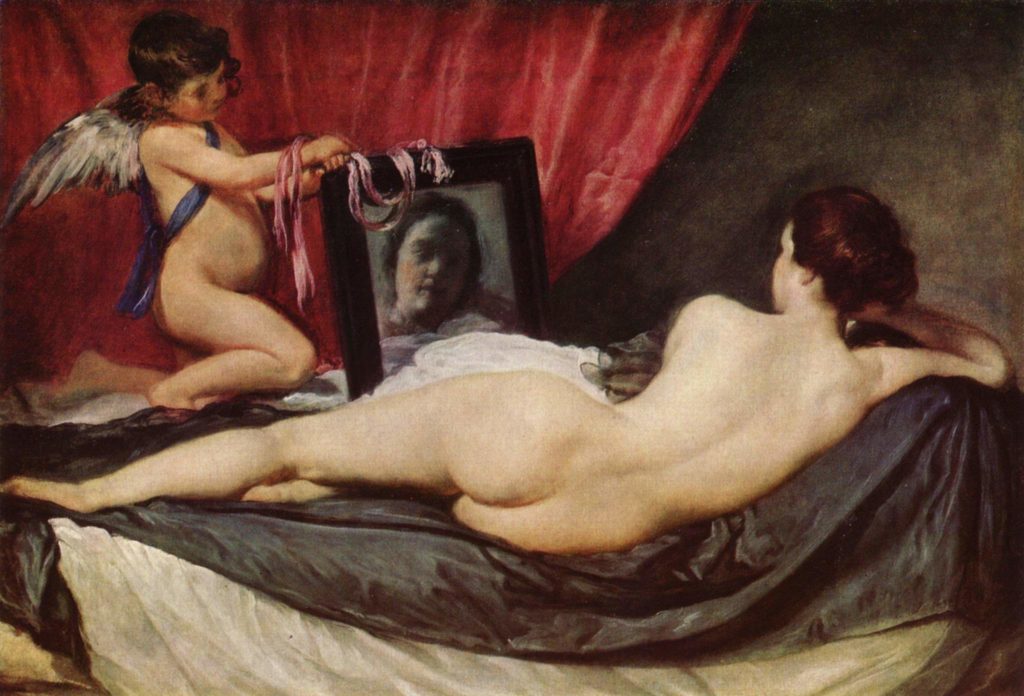 This is also known as “The Rokeby Venus” from the house of its previous owner before the painting was acquired by the Gallery.

Female nudes are very rare in Spanish art of this period (c. 1650) because of the disapproval of the Catholic Church, and this is the only known nude painting by Velazquez. Venus lies on a couch looking at herself in a mirror held by her winged son Cupid. We can therefore see her face in the mirror as well the curves of her body seen from behind. The beauty of the painting lies in the composition and the many variations of skin tone on both Venus and Cupid.

This is another world-famous painting, although it is one of four that Van Gogh painted on this subject in August and September 1888, intended to decorate the room of his friend Paul Gauguin with whom he hoped to start a new partnership. For Van Gogh, the sunflower was a symbol of happiness, as was the colour yellow.

However, the timeless quality of this painting comes from the realization that these sunflowers are past their best. None of the bunch is fresh, and some have lost all their petals to leave just the seed heads behind. There is, however, beauty in decay and the promise of new life from the seeds that can only ripen after the flowers have died. The message of the painting is therefore equivocal.

The viewer can see how the artist has used thick brushstrokes (impasto) to produce a variety of textures in this painting.

Needless to say, this brief survey barely scratches the surface. One quick visit to the National Gallery cannot be enough and you will want to return as soon as possible. There is no charge for admission (except to special exhibitions) so you can certainly afford to!