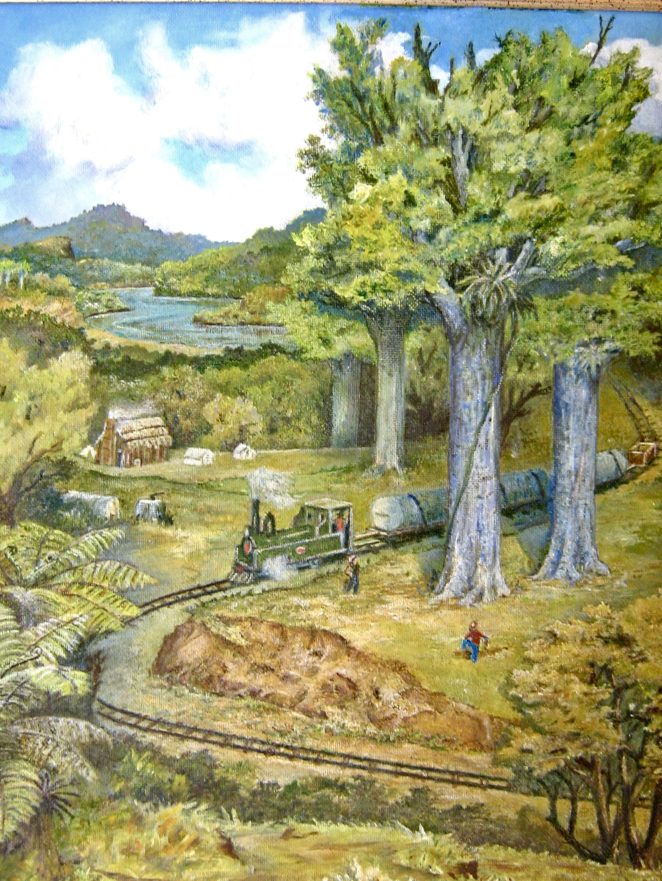 I guess I will talk about the reason why so many talented people do not show their art work in Art Galleries.

Here in the introduction is my husband’s oil painting about the old Kauri logging days in Northland. They used to fell the ancient Kauri for masts for ships and houses. Now it’s fashionable and Kauri trees are so very precious. Some Kauri trees are being wiped out by a disease called “Die Back”. Kills Kauri trees. People who go walking in places with Kauri trees are asked to wash their boots before entering and wash their boots again when they return to stop spreading that disease to trees.

This first painting is in oils.

Anyway, back to Art and Art Galleries. Warwick my husband has sold many a painting in the days where it once was affordable to do that. He got some patrons who did buy his work and this painting of the Kauri trees is one of them that got sold.

One year, he was going to exhibit his paintings in someone’s garage. They were all there. Overnight, every single painting got stolen. He couldn’t do this for a very long time.

He told me about some places in New Zealand, Auckland in fact. There is a person who took artists in and sold them on their behalf. One of those, can not sell to any other gallery in New Zealand. A contract. The same person took paintings of 2 artist women Warwick once knew. They got may be $200.00 or $300.00 NZ but when they died this person put up the price to $2,000.00 or $3,000.00.

My niece had done some art and went to this same man. He rejected her art. Then he turned around and copied her idea, did it himself and sold it for a mint.

Here is one of Warwick’s watercolour paintings of the Kauri. I love the Kauri tree, they can live for 1,000s of years.

My recent experience. I have sold some paintings and photos in another gallery in Auckland and the curator was very nice, reasonable commission. She left unfortunately. 2 other people came, very snooty and I had given them photographic cards. The curators did not seem to know what they other one was doing, periodically lost my photographic cards and made it clear to me that they were not selling. That was because these women have their own, “Cliche” and only use their own people in their group. I know the score!

This is not one of my New Zealand Woodpigeon that went on my photographic cards. Yes, I have sold some of my photos.

No I am not officially professional photographer, but I have sold some of my photos because people liked them. I think the subjects sell themselves.

Since some time, another gallery took in my photographic cards in Auckland, and they too also lost the cards. After several efforts of trying to get them sold I did not bother with that gallery. Until recently, when I got notice that some of these cards were recently sold. The gallery takes 35% commission, there again fairly reasonable for an Auckland Gallery, some will take 60%. Yes, that’s right that is how much some of them take.

Now I was tentatively thinking of taking a risk in view of displaying Warwick’s and my Art gallery since they sold the cards!

I think the Art Gods in human form were laughing!

I wanted to sell my photographic calendars for $25.00. To cover my costs. I was told that their people all sold their calendars for $20.00 and I should do the same. After my costs, I would make $4.00 on each calendar. The art gallery and the printers got the rest of the money.

We made an appointment. The price for a month’s display, $700.00 a month. Every picture had to be framed. That is standard plus 35% commission and I had to keep my prices down. Buy the time I sold my paintings I may make $10 or $20 if I was lucky to sell them at all. Plus, it was, “This is my show”. She did not like this painting.

There was quite a lot she didn’t like but she was picky.

Now I am a reasonable person, I was willing to stick to black and white as she asked.

Warwick and many of his work she did not like. Did not want to go near the art gallery because you also had to pay for wine and drinkies. With opening night. It puts him right off.

The other fact, sometimes, I simply don’t like what’s in Art Galleries and I am allowed to have an opinion too. Again, I think sometimes it’s the old King with no clothes or the emperor with invisible clothing. How clever people are to put ugly stuff or depressing subjects and tell everyone how clever it is.

What really put me off, was not the fact that she was picky, I was not even insulted if she didn’t like some of my photos that I already have sold. What put me off, was the price of displaying in the gallery when I could not even cover my costs. Even if I sold ever single painting or black and white picture. I would lose most of the money I put into displaying in the exhibition in the first place.

Im not surprised, there are street artists who paint on walls and disappear.  They may not be earning but at least their art is able to be seen!

No I won’t give up or put up. I will find another way, and there’s enough pirate in my ancestry to do it too.!