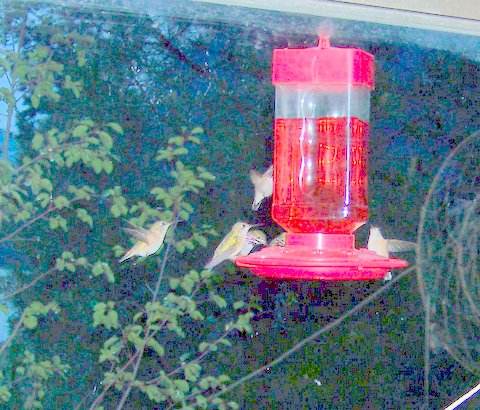 The picture is one of six hummingbird feeders we had at the place and all of them were packed with hummingbirds every morning and evening. I’ve honestly never seen so many hummingbirds in one place at one time. In the picture, there are actually eight hummingbirds at this feeder. Two of them are hidden behind the feeder; one of them feeding and the other one hovering in place. The image isn’t good enough to see it, but there are three different species at the feeder.

One of the other feeders was nearly always visited by even more hummers at feeding time. I had a picture of it, too, but can’t find it right now. At that feeder, I once counted an astounding 28 hummingbirds and five different species.

When there are this many hummingbirds feeding at once, there are almost constant fights. What most people don’t know is that hummingbirds do make angry chirps when they are ‘arguing’ with one another.

I wouldn’t even guess at how many hummers visited each day at all the feeders combined, but we were going through a gallon of sugar water every two days. Considering how tiny these birds are, that is a lot of sugar water.

What do you call a group of hummingbirds? There are actually a number of names that can be used. Among them are a bouquet of hummers, a shimmer, tune, glitter, or my favorite, a charm of hummingbirds. Charm is a fitting name for little birds that are indeed charming. I usually just called them a “whole lot”, though.