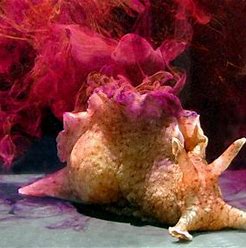 Sometimes as I am stumbling through the internet I get side tracked and learn new things. That happened this morning. I saw the question, “How much do you know about the California Sea Hare?”

Here are the things that went through my little brain! Well, I know a hare is a rabbit. I don’t know why a rabbit would be associated with the sea. I couldn’t really imagine a soft little bunny hopping off to sea. So I began my research.

These are not little bunnies in the sea. Apparently, when it comes to sea slugs the California Hare is the most commonly know. There are some interesting features for this mollusk. It is called a sea hare because the large anterior tentacles that are ear-like. So they it looked like the ear of a rabbit.

They bread in a very unusual fashion. They form a long chain and they possess both male and female parts, so the mating chains can produce millions of eggs. They often found hiding in vegetation. They also can spread a kind of ink for protection.

They have a very large neurons, they are gathered to be used for neurological studies.