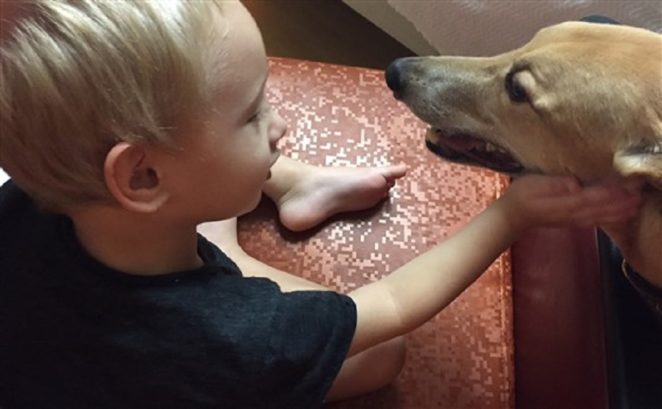 This story is amazing since a former Greyhound who used the name “Gene’s Outlaw” in dog races in Daytona Florida for nine months before he was retired to find work in the Indianapolis Prison Greyhounds Program where the former Gene’s Outlaw went with his new name Finn.

The purpose of the Indianapolis Prison Program is to have the inmates learn to take care of animals and give them a purpose in life on the right side of the law after they are released from prison.

Mandi Moore who is the current owner of Finn, made the decision to adopt the Greyhound two years ago when two of her dogs passed away from old age.

The reason that Mandi changed the name of the Greyhound from Gene’s Outlaw to Finn was because her late father-in-law who recently passed away. His first name was also Gene.

It is kind of unusual for Greyhounds to find work after the days of running in the dog racing circuit ends finding work as a service dog at Riley’s Children’s Hospital in Indianapolis after Finn and his owner were able to prove to the powers that be that run that not for profit charity that began operations in 2013 that Finn was fit to work with children that have special needs in a children’s hospital setting.

If there is anything that we all can learn from having a therapy dog is that like exercise, the anxiety rate and depression fade away by sharing some love with a good friend like Finn.

I am happy to see that dogs these days are being used by not for profit programs to assist people who are going through a rough storm in our lives.