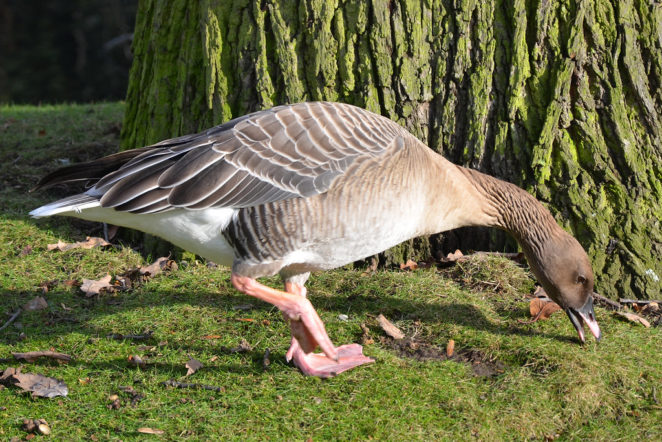 The pink-footed goose (Anser brachyrhynchus) is a winter visitor to the British Isles from Iceland and Greenland, although there is also a population in Svalbard that winters in Denmark, Germany and The Netherlands. The migrants that reach Britain are most likely to be seen in southern and eastern Scotland and northern England.

An adult pink-footed goose is around 24 to 30 inches (60-75 cms) in length and is distinguished by its pink feet and pale grey back. They have dark heads and pale bodies. The sexes are alike.

On their wintering grounds, pink-footed geese congregate in flocks and family groups to feed from scraps on bare farmland after the harvest has been gathered. They are noisy fliers, calling to each other with varying notes that some would term musical.

Pink-footed geese breed around June after the snow has thawed in their breeding grounds, which are places where predators, such as Arctic foxes, are less likely to trouble them. The nest is a low mound of vegetation lined with down. Three to five eggs are laid, these being incubated by the female for up to a month.

The goslings are able to fly after about eight weeks and will join their parents when they migrate south and return the following spring, after which they will move away to form their own groupings. Juvenile birds reach adulthood when their feet change colour from yellow to pink.

(The photo is not by me, but taken from a copyright-free source)