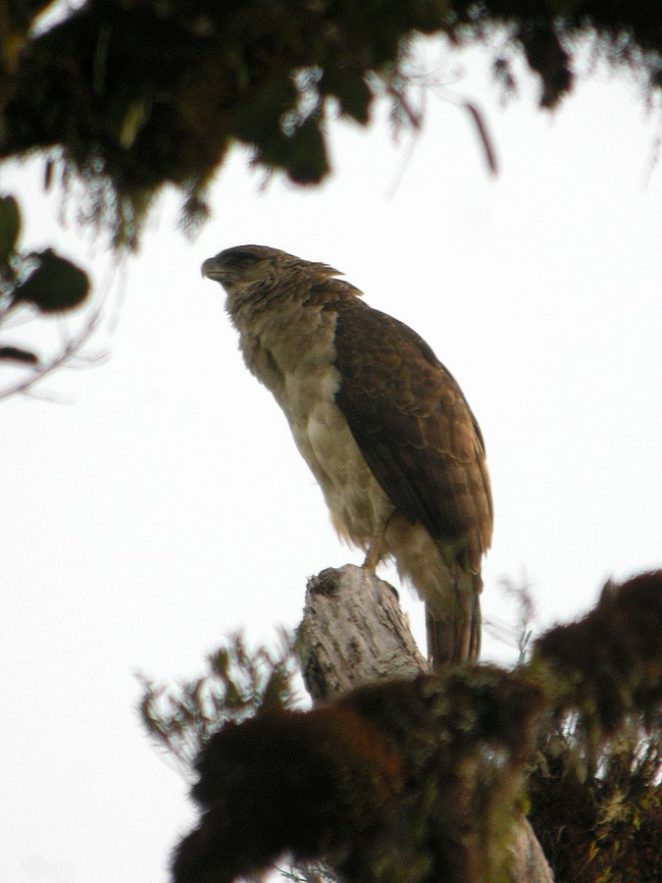 As its name might suggest, the New Guinea harpy eagle (Harpyopsis novaeguineae) is confined to the island of New Guinea, where it lives in forests up to 3,200 metres (10,500 feet) above sea level.

It measures up to 90 cm (35 in) in length. It has brown upperparts with dark barring across the tail. The breast is brown and the underparts white. When in flight, dark barring is plainly seen across the underside of the wings and tail.

The unfeathered legs and feet are yellow. The harpy eagle has a crest that can be raised at the back of the head. There is a ruff of feathers around the face.

Female birds are larger than males but otherwise similar in appearance.

The New Guinea harpy eagle is a formidable hunter that takes a wide range of prey including wallabies and tree kangaroos. They will also take smaller domestic animals. The face ruff is used to help trace the source of sounds, and the bird also has excellent eyesight.

Harpy eagles not only swoop on their prey from above but also chase it on the ground for short distances by running and bounding on their long legs.

Breeding pairs return to the same nest site every year, building a large platform of sticks near the crown of a tree at around 20 metres (65 feet) above the ground. A single egg is laid.