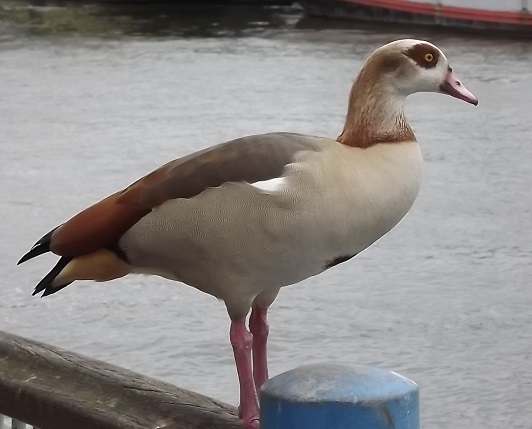 The Egyptian goose (Alopochen aegyptiacus) is, as its name suggests, a native of Africa, where it is found in various wetland habitats, but it has spread elsewhere as a result of deliberate introductions. A British population was established in the late 18th century and it is seen most commonly in Eat Anglia and the Thames Valley. It is estimated that there may be around 1,000 individuals in Great Britain.

Despite the name, the Egyptian goose is less common in lower Egypt than in Africa south of the Sahara, although it is found on the upper Nile. In South Africa it is regarded as a pest because it feeds on food crops.

The botanical name “Alopochen” is derived from Greek words meaning “fox-like” and “goose”. Although botanical names are often fanciful inventions, the actual name of the bird in ancient Greece was “khen alopex” because of its fox-brown plumage.

The Egyptian goose measures 63-73 centimetres in length (25-29 inches). It is sturdy and long-legged and has an erect stance. It has a long curved neck.

The general colouring is buff, with a reddish-brown back and grey underparts. There is a distinctive dark spot on the chest.

The neck and head are pale, darker towards the back, with a brown ring around the neck and a dark patch around the eye, which is dark yellow. The small bill is pink with a black mandible, base and tip.

The wings are dark, the primary feathers being black and the secondaries metallic green. There is a conspicuous white patch on the wing coverts. The rump and tail are black.

Males and female look similar, although females are smaller than males.

The Egyptian goose swims with the tail held high. It may sometimes dive to avoid danger. It feeds on aquatic plants, seeds and grass. It usually feeds in family groups or larger flocks.

They are usually silent, but the male has a husky wheezy call and the female has a higher-pitched call.

Breeding takes place near lowland lakes including reservoirs and flooded gravel pits, although nests have been found up to a mile away from water. The nest site can be under a bush or in a hole in a tree or a bank. The nest is constructed from grass and reeds lined with down.

A clutch of eight or nine eggs is laid and incubated by the female. Hatching takes place at around 28 days. Both parents look after the goslings, but the young are able to feed themselves. Fledging is slow and can take up to seventy days after hatching. The family stays together for several months before the young become independent of their parents. It will be two years before they are ready to breed.

The accompanying photograph of a lone Egyptian goose was taken by me alongside the River Thames at Putney Bridge in London. It did not seem to be at all fazed by the presence of people walking close by or the heavy rush-hour traffic crossing the bridge.