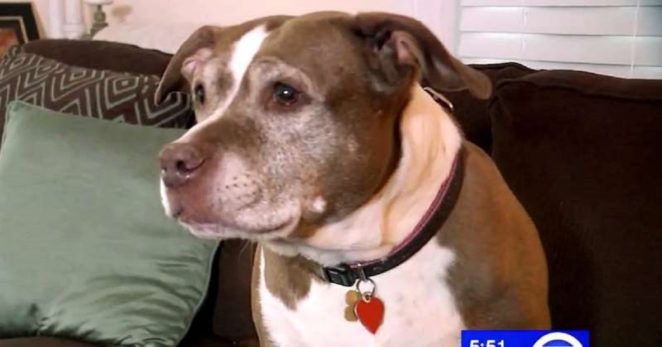 An 11 year old female Pit Bull named Sadie is being called a heroine for her use of her instincts of leaving her home in Westchester County New York last week when Sadie’s owner Serena Costello and her daughter were not home at the time when Sadie smelled gas coming from her owner’s home.

Sadie was able to break down the fence that surrounded her home to start barking a lot to gain the attention of her neighbors. When the neighbors saw Sadie on the street barking a lot, one of them contacted the local police to report that a dog was on the loose.

When the police arrived where Sadie was seen barking, she led them to the home of Serena Costello. The police officers then were able to find out that a foul odor of gas was coming from the Costello home’s basement..

The police contacted Con Edison as well as the Eastchester Fire Department to report that a gas leak was coming from the basement of the Costello home.

Both officials from Con Edison and the Eastchester Fire Department were able to stop the gas leak in the nick of time thanks to the efforts of Sadie who was able to use her sharp mind to get the attention from the authorities to prevent the Costello home from blowing up into a pile of rubble via an explosion.

Lesson to be learned is all dogs are loyal to their owners if and when they are raised with love and kindness. The same lesson applies to Pit Bulls. Sadie is my hero as well as Serena and her daughter can vouch for me.