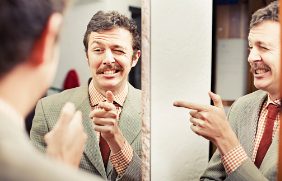 I was curious, why someone would be constantly posting images of themselves, featured as the central focal point or of the objects or property under their control, or management, I.E. excessive photographs on 99% of themselves or their things. This extract is from the below study which examines the phenomenon of selfie posting on social media and how it relates to narcissism, the Dark Triad, which comprises:

This sample is made up of 499 participants who completed an online survey consisting of personality measures as well as open- and closed-ended questions regarding selfie posting behavior. Data were analyzed using a negative binomial regression model.

Furthermore, the study found that individuals with high levels of motor and non-planning impulsivity posted significantly more selfies than individuals with lower levels of those traits. This study also found a trend whereby vulnerable narcissism and anxious attachment were predictive of increased selfie posting. Participants with higher levels of reflective functioning were found to post fewer selfies on social media, as were:

Intentional impulsivity was not found to be significantly related to increased selfie posting on social media.

SOURCE: An excerpt from a 111-page paper: “A dissertation submitted to the Graduate Faculty in Psychology in partial fulfillment of the requirements for the degree of Doctor of Philosophy, The City University of New York.”