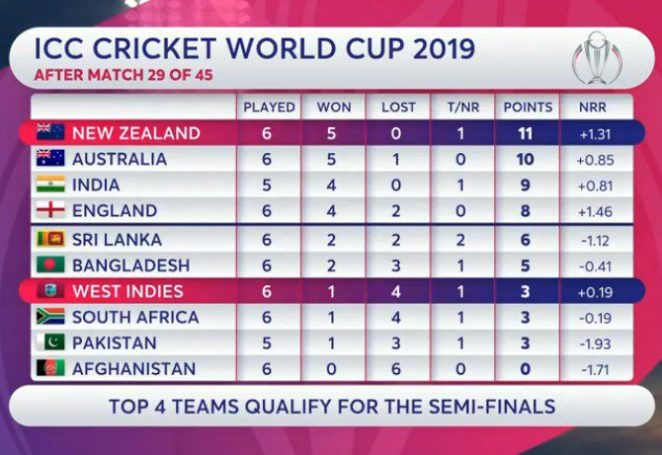 It was perfect weekend for cricket fans. The weather of UK was Just Fine. Both of the matches completed without interruptions of rain .

People expecting a one sided match between India and Afghanistan but Afghanistan showed great resistance. On a pitch where ball was turning and gripping, afghan spinners bowled really well and restricted India on 224. In response, despite loosing couple of early wickets, they kept the nerve calm and took the game into last over. Although they lost by a narrow margin of just 11 runs, but such fight against one of the best team in the world will definitely boost their confidence.

The match between New Zealand and West Indies was a cracker. New Zealand won the toss and opted to bat but the beginning of their inning was destructive. They lost both of their openers on just 7 runs. Then Once again there was only Kane Williamson who took all the responsibilities on his shoulders and played a magnificent inning of 148. His 160 runs partnership with Ros Taylor was amazing. Ros Taylor also scored useful 69 runs and New Zealand set a target of 292.

In response, the beginning of Windies’s was also bad. The lost two wickets inside 20 runs. After couple of early loses Chris Gayle and Shermon Hetmyer played fantastic innings. With the help of 122 runs partnership between Gayle and Hetmyer Windies strongly came back in the game and at one stage it was looking that Windies might achieve this target inside 45 overs, but Kiwi bowler have another plan. When score was 142, Hetmyer was bowled by Farguson, on very next delivery captain Holdet also caught by Tom Lathom. After couple of overs Gayle also depart on 87 from 84 balls.

Carlos Braithwait played one of the best inning but there was no other batsman to support him. He scored a magnificent hundred on just 82 balls but can’t took his team over the line and give away his wicket on the lost ball of 49th over. His 41 runs last wicket partnership with Cortrell did not work for Windies and they lost the match by just 5 runs.