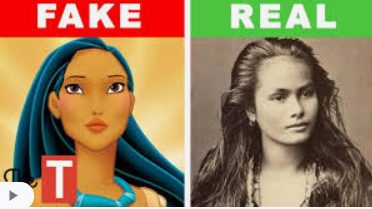 In the famous Disney film, Pocahontas sang about the “Colors of the Wind”, and we learned that everyone can get along, despite their cultural differences. While the intent behind the movie may have been good, it is nowhere near being historically accurate. The true story is much darker, and for some of you out there, this video just may ruin your childhood memories.

This documentary is the true story of the iconic Pocahontas, who was a Native American woman,(red Indian) notable for her association with the colonial settlement at Jamestown, Virginia. She was the daughter of Powhatan, the paramount chief of a network of tributary tribes in the Tsenacommacah, encompassing the” Tidewater region of Virginia”, comprising 25,000 tribesmen. Pocahontas, final Resting place: St George’s Church, Gravesend