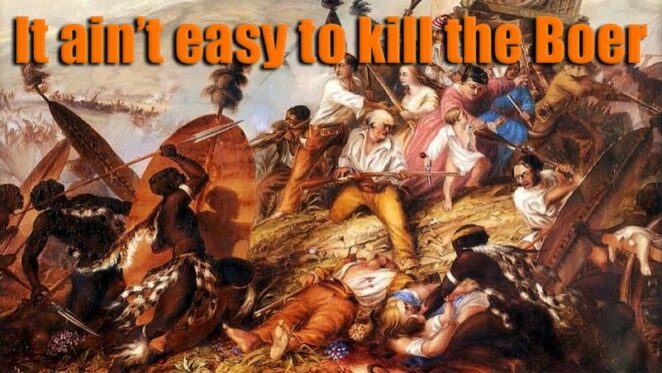 We are all colonizers, comprising small groups of Europeans, who, for various reasons, braved the treacherous oceans of the world on tiny wooden ships, risking all, for freedom’s sake. This song by Dean Chancy, well known American Country & Western singer-songwriter, is called: “It Ain’t Easy To Kill A Boer.” epitomizes one such group of founding fathers, in 1652, the so-called, colonizers, the legendary South-African Boers, (Farmers).

Those great men and women of the soil, about, whom, American author, James Michener wrote his bestseller, The Covenant, the Boers covenant with God, to deliver them, a tiny, group of a few hundred men and women from certain death by their attackers, 15,000 armed Zulu soldiers. Their prayers were answered, when after the battle, which lasted several hours, 10,000 of their enemy lay dead all around them, and not one life of their own was lost.

All along, this small group of people wanted nothing more than to be allowed to worship and pray to Almighty God in their own customary way and to exist as a people. After fleeing from Europe and the religious oppression and dominance of the Roman-Catholic church of the day, in 1652, over their Calvinist and Lutheran churches of Europe. The lyrics of this song are by a young South-African, Boer, descendant, and friend of mine, Willem Petzer. Please help our cause by sending this link to anyone who detests the oppression of minority groups.