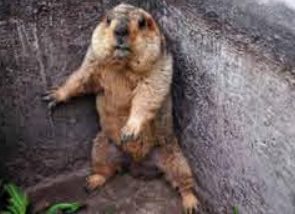 It derives from the Pennsylvania Dutch superstition that if a groundhog emerging from its burrow on this day sees its shadow due to clear weather, it will retreat to its den and winter will persist for six more weeks; but if it does not see its shadow because of cloudiness, spring will arrive early. …

Storywriter Danny Rubin and Ramis got the inspiration for the plot of “Groundhog Day” from “The Gay Science,” a famous work from German philosopher Friedrich Nietzsche. In what Nietzsche described as “the most personal of all his books,” he describes a man who lives the same day over and over.

Data from the Stormfax Almanac’s data shows that Phil’s six-week prognostications have been correct about 39 percent of the time. … That’s a 50 percent accuracy rate. So you’ll be better off flipping a coin than going by the groundhog’s predictions.”

Is that what’s happening to the world right now?