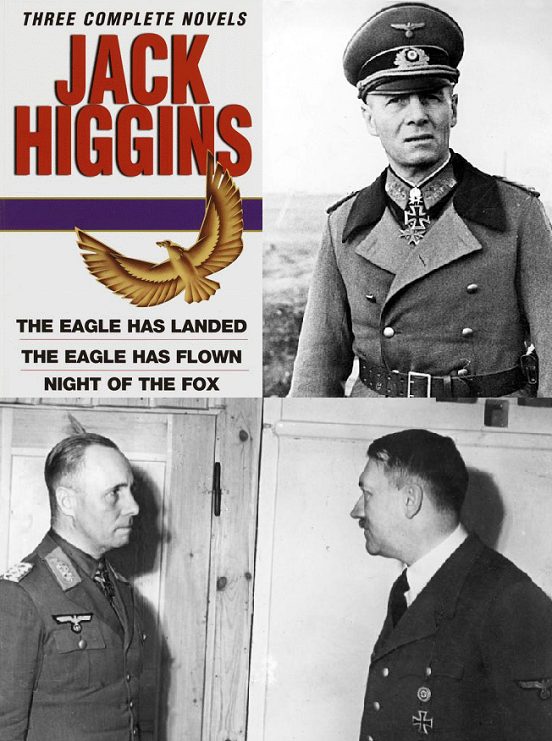 “Rommel.” Hitler smiled a ghastly smile that was almost one of triumph.

“So, the Desert Fox wishes to play games.”

“I’m almost certain of it.”

“The people’s hero,” Hitler said. “We must handle him carefully, wouldn’t you say?”

“Or outfox him, my Fuhrer,” Himmler said softly.

“Outfox him. Outfox the Desert Fox.”  Hitler smiled delightfully.“Yes, I like that, Reichsfuhrer. I like that very much indeed.”

♦  Dialogue above extracted from “Night of the Fox”, a novel by Jack Higgins.

This write-up is a recommendation of 3 books written by Jack Higgins.  But I thought the excerpt from one of those books was a great way to peak your interest.

Almost everybody knows Harry Patterson better known as Jack Higgins.  He is an international bestselling suspense thrilling author who is among the world’s most popular writers.  He is remembered by many for his novel, “The Eagle Has Landed” (1975); but his book “Night of the Fox” (1986) is equally as impressive. Though his books are a work of fiction, the writer’s efforts to research the historical events on which the plots are based were painstakingly real. For example, part of his research involved actually meeting with and reviewing the diaries of a woman who was trapped on Jersey during World War II.

The book, “The Eagle Has Landed”, was made into a movie (1976) which also starred a few of my favorite actors:  Michael Caine, Robert Duvall, and Donald Sutherland disguised as Polish airmen.  It was a plot to kidnap Sir Winston Churchill.

The book, “Night of the Fox”, was made into a movie (1990) which starred two of my favorite actors, George Peppard (as American officer, Col. Harry Martineau) and Michael York (as high-ranking German officer, Field Marshal Erwin Rommel, the “Desert Fox”).

The book “The Eagle Has Flown” is a sequel to “The Eagle Has Landed”.  Fans of novels by Higgins consider it worthy as a classic thriller, however, it was not adapted to film.

Nevertheless, if you are compiling a private library of WW II suspense thrillers, this 3-in-1 would be a great addition!

Night of the Fox (1990) https://t.co/ayxdJPKEcy via @YouTube
Film adaptation of novel with the same title; a classic World War 2 thriller written by Jack Higgins.

The Eagle Has Landed (1976) https://t.co/WBlxes44ss via @YouTube
Film adaptation of novel with the same title; a classic World War 2 thriller written by Jack Higgins.

Books By Jack Higgins – Since the publication of "The Eagle Has Landed" (1975), every novel he has written has become an international bestseller … @amazonbooks Available in various formats. https://t.co/LqeYiwBfl0 #goodreading #booklovers #SuspenseThriller pic.twitter.com/UDSiAMQpUf