The amazing Church of St. Dunstan must have been blessed since it survived the Great Fire of London in 1666. This English parish church is located between the Tower of London and the London Bridge. It dates back to Saxon times. When it was damaged in the great fire the church was once again rebuilt and given a steeple by Sir Christoper Wren.

Then along came the Blitz in 1941 and the Church of St. Dunstan took a direct hit. Aftward all that was left of the church were the north and south walls and the steeple. After it was all over London began the slow process of rebuilding. The church remained in ruins and in 1967 its shell was turned into a public garden. 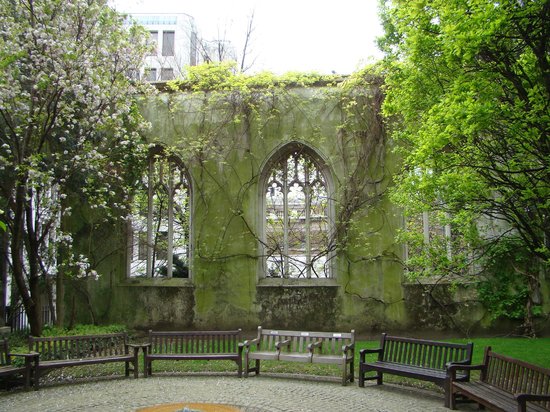 Because the church is located in a quiet side street surrounded by modern buildings it has become a secret garden. The Church of St. Dunstan remains one of the last ruined buildings left by the Blitz. the walls are now overgrown by trees, ivy, and creeping flowers that grow along the walls. It is a living memorial of the resilience of a city like London to rise up out of the ashes.