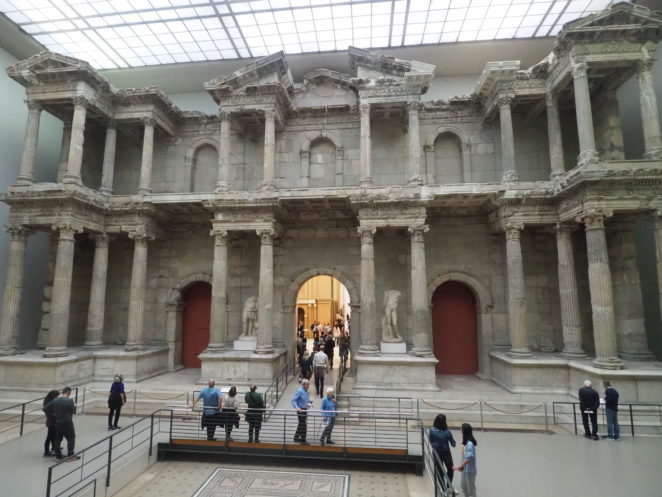 Opened in 1930, this is unlike anything one is likely to see anywhere else in the world, and it owes its existence to the activities of German archaeologists who worked in the Middle East during the late 19th and early 20th centuries and sometimes acted in ways that many people today would question. That said, the results of their efforts are well worth seeing.

The Pergamon Museum is currently undergoing a major redevelopment, which means that the main reason for its naming is not available to view. This is the Pergamon Altar, which was discovered in the ancient city of Pergamon in western Turkey and reconstructed in Berlin at around the turn of the 20th century. The Pergamon Museum was built specifically to display the Altar and associated friezes and other objects from the site.

The Museum was expanded to allow for the display of other huge monuments, and these are what can be seen at present in the South Wing of the Museum while the other parts remain closed.

You can therefore walk down the Processional Way of the city of Babylon and then, like King Nebuchadnezzar, walk through the Ishtar Gate. Both of these are adorned with thousands of brick-shaped glazed blue tiles that are decorated with images of real and mythical animals. These were discovered in fragments and shipped to Berlin in more than 500 huge crates, to be re-assembled according to documentary evidence from the time of Nebuchadnezzar.

When you go through the Ashtar Gate you find that you have also walked through the Market Gate from the ancient Greek colonial city of Miletus. This is a massive two-storey structure (see photo) that stands nearly 95 feet (29 metres) across and 55 feet (17 metres) high. It dates from the 2nd century AD and stood as a link between two public areas in the town until it was felled by an earthquake in the 10th century.

The reconstruction in Berlin contains around 60% of the original marble blocks, despite further damage having been caused during World War Two.

The Miletus Hall also contains a superb mosaic floor from a house in Miletus, a round tomb from north of Rome, and a partial reconstruction of a porticoed hall from Pergamon, this being one of the few items currently on display in the Pergamon Museum that actually came from that city.

Go upstairs and you will find exhibits relating to Islamic Art. These include the remarkable Aleppo Room, consisting of painted wall panels from around 1600 that once adorned a merchant’s house in the Syrian city of Aleppo. It is probably just as well that the panels are now in Berlin, seeing that the building, which had survived for hundreds of years, fell victim to bombing in the recent conflict in that region.