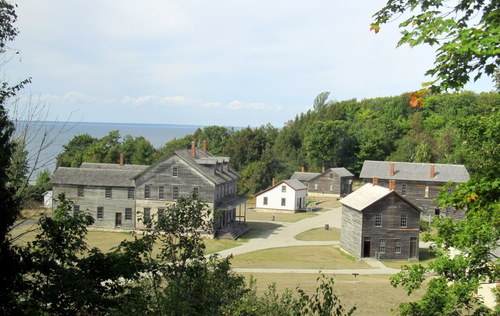 Whenever we hear the word “ghost town” in America, we immediately think of a very dusty, ruined, damaged place in the Old West, where the culture of cowboys dominated once around southern states such as Texas, California, Mississippi and so forth.

We are wrong. Seriously. Well, we must think about that again because Michigan has its own ghost town as well. And much to our surprise, the name is Singapore.

Of course, to most people, Singapore reminds us of a very small country but has been rising as one of the most developed nations in the world. Singapore has become a wealth nation, turning into one of the most significant financial centers of the rest of the world.

Dating back to 1819 when Sir Stamford Raffle landed on Singapore, this ambitious gentleman soon recognised the island as excellent choice for the new port. Being aware of a rising Singapore of British Empire in the future, Americans wished to create their own “Singapore” in hope that this could be a cost-effective project.

And they decided to make that dream come true. In light of potential options, they chose Michigan as promising land.

As far as we know, Michigan is home to a large amount of ghost towns: ruins and remnants of cities that once bustled with industrial activities but have truly faded away without a trace since 19th century. One of such locations is the town of Singapore

In 1836, Singapore was created as a lumber port town in Southwest Michigan. Americans anticipated to enjoy the success that the original Singapore of British Empire which shifts from a small fishing town to a significant port city in modern world.

Unfortunately, that never happened in the real world. It has always been an unrealistic dream..

Initially, the peak of Singapore such as the building of two hotels, three mills, convenience stores as well as the first schoolhouse in Michigan nearly proved this right. Even though a scandal over circulation of bank notes damaged the reputation of the town, Singapore remained prosperous.

Finally, Singapore was destined to be destroyed and never rose again. In 1842, the town endured the disastrous 40 days of severe blizzard that devastated the whole region. Thanks to the stocked goods of a shipwreck off the shore of Lake Michigan,the residents survived the starvation during the catastrophic storm.

In 1871, another disaster came. A widespread fire forced the majority of the town to evacuate. Obviously,the fire and its mass destruction led to the deforestation of the region. Singapore’s remains were wiped out and is lying under the surface of sand dune nowadays.

Breathtaking views of long-buried Singapore tourists can sightsee now are the Singapore Yacht Club which sits in the downtown of Saugatuck and Douglas along the banks of Kalamazoo River. Let’s visit Michigan’s Pompeii by taking part in yacht club so that you can broaden your horizon of past prominent history of America.